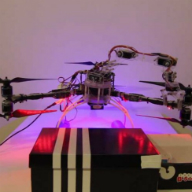 The Cypriot team ArachnoBeeA, winner of the NASA International Space Apps Challenge has been invited by NASA to attend the launch of a space rocket in September 2015.

In statements to CNA, team leader Aleksandar Bozic said that the team was very proud to be among the top six in the world and first in its category, and added that they had been invited by NASA to watch the launch of the Space X resupply rocket from the Cape Canaveral to the International Space Station in September.

“This is a once in a lifetime experience. Watching a man made technology going to space is truly thrilling,” he said.

The spider-bee drone can be used for small cargo transport as it has a ‘grab and capture’ capability and the ability to dock and release.

Participants had been asked to develop mobile applications, software, hardware, data visualization and platform solutions that could contribute to space exploration missions and help improve life on Earth.

On Friday the Cyprus Space Exploration Organisation (CSEO) is organising a press conference that will be held, under the auspices of the Minister of Communications and Works Marios Demetriades, in honour of the ArachnoBeeA team.

The CSEO said the team would represent Cyprus in September at the official award ceremony, which will be held at NASA’s Kennedy Space Center and will attend the launch of a space mission. A delegation and officials from the CSEO will also hold scheduled meetings with representatives of NASA, to discuss collaboration. “We will have discussions with NASA officials to see how our idea can be used,” Bozic said.