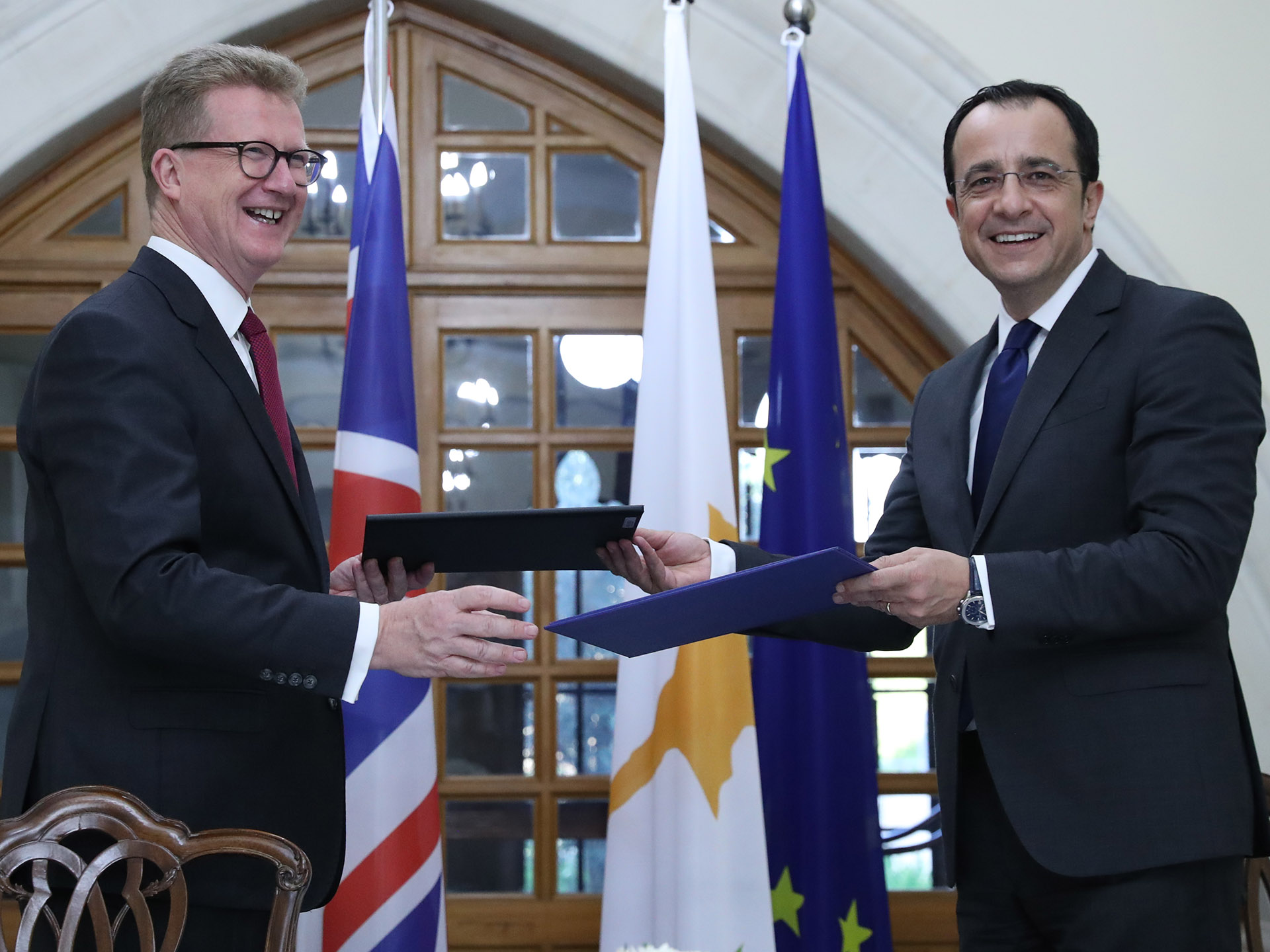 President Nicos Anastasiades on Monday hailed as historic the signing of an agreement with the UK to allow development of certain areas inside the British sovereign bases, 60 years after independence.

“I think today is a historic day for the residents and owners of property inside the territory controlled by British authorities, but also concrete proof of the excellent relations between the Republic of Cyprus and the United Kingdom,” Anastasiades said during the event at the presidential palace.

The agreement concerns 18 square kilometres of around 254 square kilometres – or 3 per cent of the island’s territory — retained by former colonial ruler Britain in Akrotiri in Limassol, and Dhekelia, Larnaca, as sovereign territory used as military bases.

Under the 1960 Treaty of Establishment, properties inside the two areas could only be used for agricultural purposes.

The arrangement between the two countries was made in 2014 between Anastasiades and then British prime minister David Cameron.

The president noted that the process to date has been complex, with numerous particularities that had to be tackled effectively.

“The agreement constitutes the biggest change in land use and development of various zones inside the bases since the foundation of the Republic of Cyprus,” he said.

Any obstacles were overcome through mutually beneficial solutions, having as primary concern the welfare and prospects created for the residents and property owners, Anastasiades added.

High Commissioner Stephen Lillie said the discussions between the sides were complex but they showed the commitment of the two countries to developing bilateral ties, and finding new areas of cooperation.

“This agreement means that, as far as possible, residents in the Bases will now enjoy the same rights as Cypriots living in the Republic to sell and develop their land,” Lillie said.

“This will bring very obvious benefits to the 12,000 Cypriots who live in the Bases.  At a time when coronavirus is generating fear and uncertainty about the livelihoods of communities the world over, I take pride in the fact that we have worked together to deliver a change that will have a real and positive impact on people’s prosperity.”

The Department of the Environment of the Republic of Cyprus and the SBA Administration will on Wednesday publish the draft policy statement, zoning arrangements, and the Strategic Environmental Impact Assessment (SEIA) report relating to the arrangement.

The publication of the SEIA report will commence a 35-day public consultation phase, which is the essential first step towards allowing, in accordance with the provisions of the final Policy Statement and the zoning arrangements, residential and commercial land development in the Bases on the same basis as in the Republic.

The agreement provides for the release of about 8.6 square kilometres of land in Akrotiri and 9.3 in the Dhekelia area, which will be included development zones.

The zones will be subject to the same ownership and development rules and regulations in the Republic.

Apart from housing, the land can be used for tourism, commercial, industrial, and large-scale developments like schools, theme parks, sports and entertainment centres, and hospitals or other health facilities.

Smaller scale developments such as petrol stations, restaurants, reception halls, and others will also be permitted.