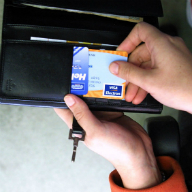 Cypriots use their credit cards less frequently but when they do use it, spend larger sums, according to a report by the European Central Bank (ECB) that studied credit card patterns throughout the EU and the eurozone for 2012.

According to the report, during 2012, Cypriots used their credit cards for 48 payments per person on average. The EU average is 79 while the eurozone average is 70.8.

While Cyprus is far from the EU and eurozone average in credit card transactions, Cypriots are above the average when it comes to the total sum of the transaction.

According to the ECB report, the average credit card spend per year in Cyprus was €4,055, which was also the EU average while the eurozone average came to €3,613.

Luxembourg topped the credit card transaction sum list with €12,000 spent on average per year, while Greece, Romania and Bulgaria again were last, registering total spend per person per year of an average of below €500.

The ECB remarks in its report that credit card usage continues to increase in all EU countries.