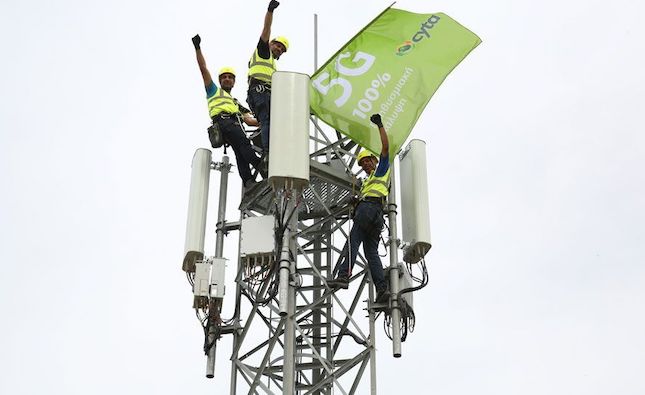 Cyta has announced the completion of the pan-Cypriot 5G mobile network that offers state-of-the-art telecommunications services throughout the country, even in its most remote areas. This makes Cyprus the 1st country in the EU with 100% population coverage.

The installation of the final antenna of the network took place in the village of Sykopetra, where residents held a simple ceremony to mark the occasion in the presence of the Deputy Minister of Research, Innovation and Digital Policy, the Commissioner for the Development of Mountain Communities, Cyta officials and representatives of the media.

Deputy Minister Kyriakos Kokkinos underlined that "the immediate availability of networks and services in every corner of Cyprus contributes to the enhancement of the digital maturity of the country and its citizens and consequently to protecting its economic resilience."

Welcoming Cyta's policy of offering state-of-the-art technologies even in areas considered extremely mountainous and remote, Commissioner Costas Hambiaouris stressed that "Cyta is one of the pillars of the community in the effort to implement a key direction of National Strategy for the Development of Mountain Communities, which concerns the promotion of the digital transition, the effective creation of infrastructure and the development of services, with the aim of modernizing the mountainous areas and improving technological accessibility both for residents and for businesses."

The president of Cyta Michalis Ioannidis, referring to the completion of the fastest 5G network in Europe, with 100% population coverage throughout the island, said that "this is an achievement that no other country has accomplished so far. For us at Cyta, it is important that all Cypriots avail of the digital transition".

In turn, the CEO of Cyta K. Andreas Neokleous stressed that "growth is for everyone, no one should be left on the sidelines. Technology and its benefits can now reach everyone in Cyprus, even in the most remote of areas".

The mayor of Sykopetra, Charalambos Charalambous, thanked Cyta for not forgetting the mountain communities and noted that technology is a basic need for them to be able to continue to grow and progress.