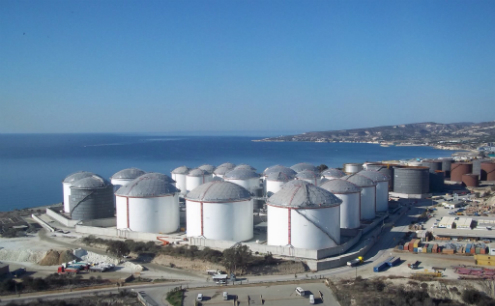 Cyprus' new failure to secure an interim gas supply until it begins producing its own from the Aphrodite field, was likely to have been its last attempt as the government has decided to wait for the permanent solution to kick in.

The board of directors of state-owned public natural gas company DEFA is expected on Monday afternoon to officially declare the failure of negotiations with Dutch energy company on the interim solution which will take into account “all pros and cons”, the source familiar with the matter said on condition of anonymity, citing the lack of authorisation to talk to the press on the matter before DEFA takes its final decision.

“The (Dutch) company changed an essential condition of the tenders and asked for the natural gas supply volume to be increased,” the source said. “Oil prices, and subsequently electricity cost, have fallen substantially in recent years and as a result (expected) benefits were dramatically reduced while risks increased. Then came the new condition which further increased the downside risks”.

“Since we are (intending to) go ahead with the permanent solution for Aphrodite and work on the (EuroAsia) Interconnector has begun, we thought we should put an end to this serial,” the source said adding that there is no time for another attempt. “This agreement which DEFA was negotiating provided for a 7-year period but it practically meant five years as it would take two years to prepare the necessary infrastructure”.

The EuroAsia Interconnector is a project that aims at linking Cyprus’s power grid that that of Israel and Greece via a 2-gigawatt subsea cable.

After the government agreed for British Gas to acquire a stake in the Aphrodite reservoir, Cyprus’s single gas discovery so far, natural gas production could begin as early as 2022, the source said adding that this step would notdepend on developments in talks for the reunification of Cyprus.

“I wouldn’t link this to the Cyprus problem especially after BG came in,” the source said “Everything has taken its course. What worries me most is the oil price drop”.

The source dismissed a proposal to task the private sector with the introduction of natural gas to Cyprus after the public sector failed four times in the past 9 years to do so.

“The problem is related to quantities,” which makes investment in infrastructure prohibitive, the source said adding that a maximum power demand of 800 megawatts, with half of it being capable of using natural gas, “hardly” justifies the investment.

With respect to DEFA’s future, the source said that the government may consider transfer its ownership to oneof the entities that will result after the separation of the state-owned power producer Electricity Authority of Cyprus (EAC) into a company in charge of production and supply and another one in charge of transmission.

The part of EAC in charge of transmission network could take over DEFA as a subsidiary, the source said.

Pavlos Liassides, the chairman of the Cyprus Free & Competitive Energy Market Business Association, which represents investment projects with a production capacity of roughly 600 megawatts, said in on Monday that the business group may decide to ask the government to scrap DEFA’s natural gas monopoly so that the private sector takes the initiative.

“Our members discussed in the past to seek the liberalisation of the natural gas market if this attempt to import natural gas fails, too,” Liassides said, adding that they might raise the issue after receiving official information about the outcome of negotiations with Vitol.

In 2013, negotiations between DEFA and Russia’s Itera also for the introduction of natural gas as part of an interim solution broke down after DEFA requested an improved offer from Itera, something the latter declined to do. A previous procedure for an interim solution involving energy giant Shell was cancelled in 2012, following the discovery of Cyprus’s first and so far single gas reserve by the Houston-based Noble Energy Inc. Co in December 2011.

Another attempt to introduce natural gas to Cyprus initiated by the Tassos Papadopoulos administration a year before leaving office in 2008 was also cancelled by his successor Demetris Christofias. The decision to switch to natural gas from heavy fuel oil for power generation in order to reduce carbon dioxide emissions and reduce electricity cost was taken in late 2002 by the council of ministers under the late president Glafcos Clerides, months before the end of his term.

An industry source who was talking on condition of anonymity said that the following the government’s decision to ditch the interim solution “its credibility among energy companies was tarnished”.

“The problem with this bid was the tight time constraints of the interim solution and the more negotiations dragged on, the less volume of natural gas could Cyprus absorb in the remaining period,” the source said. “As a result the pro unit cost increased over time. I doubt if anybody ever takes part in such a process after they included such constraints in the terms of the competition to which they cannot comply themselves”.