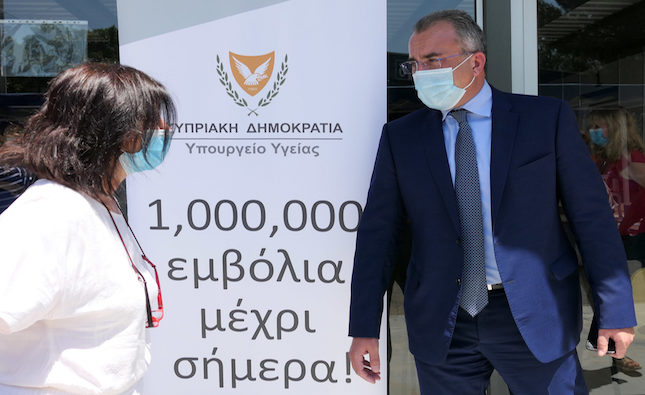 Cyprus has surpassed the benchmark of one million Covid-19 vaccinations in its race to achieve herd immunity against the virus, said Health Minister Michalis Hadjipantelas.

On Wednesday, the minister visited the State Fair Vaccination Centre in Nicosia to mark Cyprus exceeding one million jabs.

“The fact we have exceeded one million vaccines is a sign that people trust the experts, the vaccination program and the government,” Hadjipantelas told reporters.

“It sends the message that very soon we will exceed the target of 82% of vaccinated people,” he added.

The minister said Cyprus had vaccinated 74% of the population with one shot, and 66% are fully vaccinated.

According to the increased flow that exists in recent days, Hadjipantelas said it is expected that by the end of August, 82% of the population would have been jabbed.

And by the end of September, the same percentage will be fully jabbed.

The minister said there was a record number of hospitalisations in ICUs, but the health system was coping without major problems.

Over 89% of Covid-19 hospital patients are unvaccinated and getting younger.

“All these unvaccinated patients should also understand that they should help themselves, those around them and society in general.

“We have people aged 45-50 intubated. They need to understand that they, too, can help.

“The efforts that are being made are enormous, and we are trying to help and find beds – because beds are not inexhaustible.”

Hadjipantelas, the administration of booster shots for older age groups is under discussion.

“We want to be ready when we get the green light from the EU.”

Inoculations of minors aged 12-15 began this week, with over 330 jabs administered.