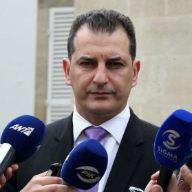 Cyprus aims at deepening strategic partnership with US

The government of Cyprus is aiming at deepening its strategic partnership with the United States, in order to secure its support for Nicosia's energy designs, Energy Minister Yiorgos Lakkotrypis said recently.

He reiterated, moreover, that the construction of an LNG terminal in Cyprus is a priority for the government, in view of exploiting natural gas reserves, located in the country’s exclusive economic zone (EEZ).

Asked if there are delays in the LNG terminal construction, Lakkotrypis spoke about challenges concerning the project’s viability, noting that they cannot be disregarded.

If a project’s net present value is negative, we have to wait until it becomes a profitable option through new discoveries in the EEZ, the Minister noted.

He added that the government cannot progress without fresh discoveries of natural gas reserves.

According to the Minister, the project’s master plan is ready, while an initial agreement with local and government authorities is also in place.

On another question about the strategic partnership of Cyprus with the US, the Minister noted that this has been said by US Vice President Joe Biden, during his recent visit to Cyprus and it was reiterated in an interview, on Sunday, with Amos Hochstein, the Deputy Assistant Secretary for Energy Diplomacy at the US Department of State.