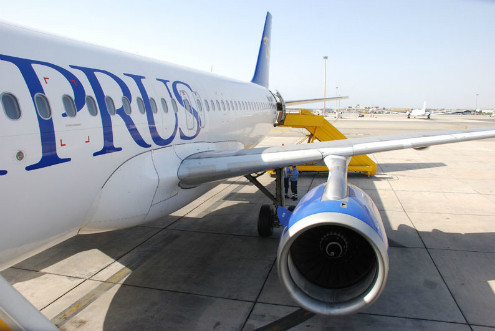 Cyprus Airways’ Plan B – a new airline in the works

Cyprus Airways(CY) is working on a ‘Plan B’ to avoid leaving the island without a national air carrier in the event Brussels gives the thumbs-down to a rescue blueprint for the company.

Under the idea, CY’s wholly owned subsidiary, Cyprair Tours Limited, a tour operating company, would apply for an air carrier permit. Cyprair Tours would also obtain CY’s airport slot and absorb CY’s staff who would be sacked from the current carrier and then rehired. Cyprair Tours would then be built from the ground up, replacing CY as the new carrier.

Unveiling the plan at a news conference on Tuesday, CY board chairman Tony Antoniou said the airline would expend all efforts so that staff get to keep their jobs. He went on to reassure employees that they would be rehired on new, long-term contracts. Antoniou also reassured customers that they would not be losing any money, as their purchases would simply be transferred to the new carrier. It’s understood that this backup plan is still in its early stages; CY has engaged the services of foreign consultants to assist in drafting it.

Calling the idea “a step in the right direction,” Antoniou said it was a safeguard in case loss-making CY needs to be wound down – leaving the island without a national carrier. The CY chairman explained this is a contingency in the event the EU’s Competition Commission does not approve a restructuring proposal for the airline submitted to it earlier this year. Antoniou said he expected the response from Brussels to come in October, after which the airline will know where it stands and can proceed accordingly. Implementation of the latest rescue plan will reportedly cost around €54m, half of which is expected to come from private investment.

However, this investment can only be made if the European Commission approves the restructuring plan and lets the government off the hook for previous assistance provided to the airline, which Brussels, on the face of it, considers a violation of state aid rules. The restructuring plan submitted to Brussels reportedly includes the downsizing of the CY fleet to five A320 planes, plus a sixth A320 to be used as a back-up. It also provides for further staff layoffs, beyond the 490 employees the airline is already committed to losing this year. The government, which owns 70 percent of the airline, is seeking a strategic investor who could potentially assume a majority stake in the company. Antoniou yesterday spoke of “serious interest” being displayed by foreign airlines as well as foreign and Cypriot investors, but did not disclose details citing confidentiality in the talks.