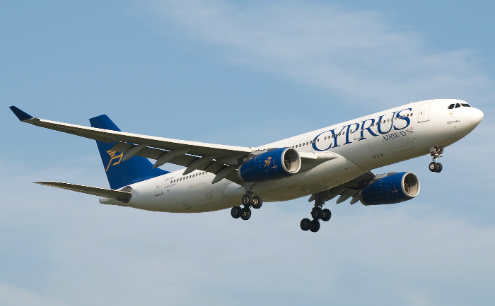 Cyprus Airways is on the right path after a year of austerity programmes, currently breaking even and now ready to attract new investors, says the airline’s chairman.

This week Cyprus Airways Chairman Tony Antoniou said he was optimistic that the airline would make a turnaround, but needed new investors to grow its fleet of six aircraft, expand its destination network that had been cut down and become more competitive with airfares.

Antoniou said that as had been agreed with Qatar Airways a month ago, the two airlines are discussing commercial cooperation, with the Doha-based airline considering a code-share agreement on Cyprus Airways flights westward to Europe, excluding Greece.

“This will be a great revenue earner for us and also feed traffic into the Qatar network,” the chairman said, with the Gulf-based airline operating its first flight to Larnaca airport next Tuesday.

Earlier Antoniou also unveiled a set of favourable results that came out of a public opinion poll conducted in February and March 2014 that indicated that “the very negative image of Cyprus Airways, a year ago, among the people, the politicians and the media has changed and the company is supported by the vast majority of Cypriots.”

The survey, conducted by CMR Cypronetwork Marketing Research, showed that the airline’s biggest pluses were its flight safety record (48%), followed by friendliness and behaviour of staff (34%) and training and professionalism of staff (28%). The biggest minuses were costly airfares (48%), flight network (16%) and direct flights (12%). The survey concluded that 66% disagreed with the closure of Cyprus Airways, 5% said they agreed, while 29% were unsure.

Antoniou said that Cyprus Airways is currently surviving without taxpayers’ money, adding that the company is making savings and increasing its revenue.

Asked about the prospects of privatisation, he said that the current fleet of six airplanes is not enough to meet the needs of the travelling public in Cyprus, adding that the company can further grow if there is private capital.