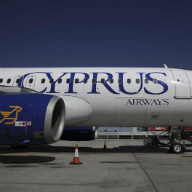 The Ministerial Committee focusing on Cyprus Airways’ survival will meet to prepare the ground for the national carrier’s next step in its quest for strategic investors, says Communications Minister Marios Demetriades.

“We are now getting into the next step of the process (of finding investors). On August 1 the ministerial committee will be presented with all initial proposals of interest submitted,” Demetriades said.

“The next step will be asking interested parties for official proposals. They will have to give us details on how they plan to make best use of the company or its assets,” he added.

The Minister also said that the government’s goal is to find a strategic investor - otherwise the medium-term viability of the company will remain in question. And that, ideally, by September this process will have been completed.

“Any prospective investor will not be buying assets necessarily, but rather the customer-base and name of the company,” Demetriades said. “And have the ability to take advantage of the bilateral agreements Cyprus has signed with third parties,” he added.

Demetriades also said that there have been a fair number of expressions of interest from various companies – about 20, five of which are in the air-transport sector.

Asked whether the withdrawal of interest by low-budget Ryanair carrier will lead to further such gestures, he said: “The only way to find out if there is real interest is the process we began. After all, we kept hearing for some time now that there was interest in Cyprus Airways.” He added: “If at the end of the day we see that there is no real interest then we will have to consider what the next step will be”.

He assured that there is a plan B in the case where all interested parties withdraw their interest but he did not give out further details.

Aegean Airlines, Israel’s Arkia and Romanian low-cost carrier Blue Air have submitted an expression of interest. He made clear, though, that the government and the state in general cannot put more money into the bankrupt carrier because that would also be illegal.  “After all, that’s the reason we are now before the relevant bodies of the European Union, faced with the possibility of having to return money put in (the airline) the carrier.”

In the autumn, the European Commission will decide whether state subsidies in the national carrier were justified.  If the ruling is negative millions of euros will have to be returned promptly, meaning that Cyprus Airways shuts down immediately.