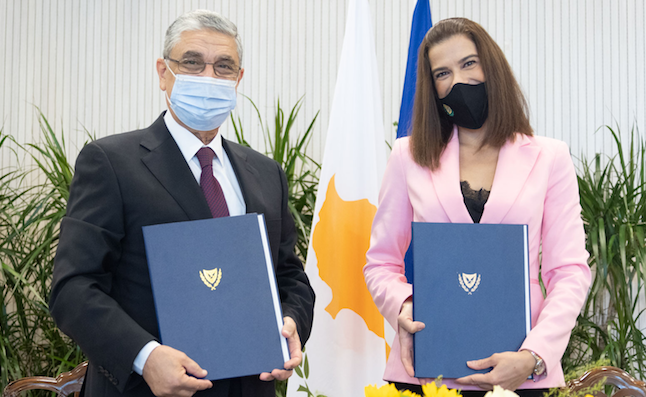 Speaking at the signing ceremony, Pilidou said the MoU “reaffirms the strong bonds between our people” saying the two countries will collaborate “closely” during the implementation process.

The agreement was signed between the energy minister and Egypt’s Minister of Electricity and Renewable Energy Mohamed Shaker El-Markabi at the presidential palace as part of the electricity interconnection project of Cyprus, Greece and Egypt.

The two ministers described the electricity interconnection of the two countries as an important component of their ongoing strong relations but also of their strategic cooperation.

“The MoU enhances further the cooperation between Cyprus, and Egypt in supporting the planning, development and implementation of the electricity interconnection of the two countries, as an additional element of the emerging Eastern Mediterranean Energy Corridor,” Pilidou said.

The Egyptian minister said the project will build strong and well-connected networks in the Eastern Mediterranean, to ensure the “security and reliability of energy supply” as well as the development of renewable energy sources.

“We are determined to implement [the project] without interventions from anyone,” El-Markabi said.

He added that Egypt, which has added 28GW of electrical energy, has electrical interconnection with Jorban, Libya, Sudan and “perhaps the largest interconnection in the region” is planned between the country and Saudi Arabia with 3,000MW.

The memorandum expresses the political will of the three governments to facilitate the timely issuance of permits so that the techno-economic studies for the construction of the submarine infrastructure and the laying of the cable can proceed.

The two countries will also coordinate on “all the appropriate measures to ensure the safety and security of the interconnection during the implementation period, as well as throughout the life of the project,” Pilidou added.

The ministers added the interconnection is a great step forward in terms of synergies, required to facilitate the integration of additional renewable energy sources into their respective mixtures of electricity and primary energy.

According to Pilidou, the electricity interconnection with Egypt “has the potential to constitute a cornerstone of our efforts to transition to a green economy, enhancing both countries’ ability to meet our respective commitments under the Paris Agreement on Climate Change.”

The whole project is part of the Energy Strategy of Cyprus and the goal is to remove energy isolation, security of energy supply and the strengthening of renewable energy sources.

As per the Memorandum’s provisions, a working group consisting of representatives of both ministries, will be set up to review and monitor its implementation.