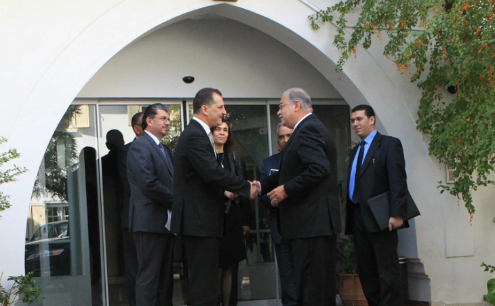 The possibility of closer cooperation between Cyprus and Egypt in the field of hydrocarbons, including the sale of natural gas to Cairo, will be examined by a joint technical committee in February.

The decision was made during a recent meeting in Nicosia between Energy Minister Giorgos Lakkotrypis and the Egyptian Minister of Petroleum Sherif Ismail. “We agreed on the immediate establishment of a joint technical committee, which will look at possible ways of cooperation between the two countries,” Lakkotrypis said after the meeting. He appeared confident that cooperation between Cyprus and Egypt would yield positive results very soon.

Cyprus is turning to Egypt in an attempt to examine all possible options for the exploitation of hydrocarbon deposits found in its Exclusive Economic Zone. In addition to plans to build a terminal for Liquefied Natural Gas (LNG), the ministry wants to have a plan B or even plan C, if this effort does not materialise. Five years ago Cyprus was discussing the possibility of buying natural gas from Egypt, as the country was one of the largest exporters of gas to Europe and the Mediterranean. However, growing domestic needs and political instability in the country have resulted in a reduction in exports, with Egypt facing problems in meeting its export contracts with foreign companies.

The Cypriot minister said they discussed how “we could exploit the natural wealth of Cyprus in cooperation with Egypt” adding that the neighbouring country could be a potential buyer of Cyprus’ natural gas. The committee, Lakkotrypis said, will examine the technical and economic aspects of this possibility and of closer cooperation in general. It will be set up immediately and the minister expressed hope that in February it will have its first meeting in Cairo.

The Egyptian Minister said the teams would look at the different options that are available for the exchange of information, joint projects, and sharing of expertise built over years in Egypt in the different fields of oil and gas, including upstream-midstream-downstream. “Today we had a very fruitful meeting. We decided to take our future cooperation between the two countries a step forward by creating and developing a joint team between the two countries of experienced staff from both ministries,” he said.

Preliminary results of an appraisal well carried out by Houston-based Noble Energy for natural gas in Block 12 of Cyprus’ Exclusive Economic Zone estimate the hydrocarbon reserve between 3.6tcf and 6tcf with a gross mean resource of 5tcf. Noble Energy operates Block 12 with a 70 per cent working interest. Delek Drilling Limited Partnership and Avner Oil Exploration Limited Partnership each own 15%. Total E&P Cyprus Ltd has been granted a license for seismic exploration for oil and gas in block 10 and in parts of blocks 6, 7 and 11 of Cyprus’ EEZ.