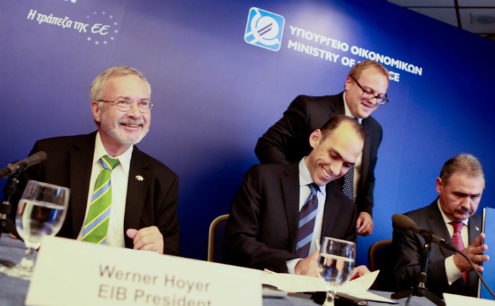 Meanwhile an additional €15-million loan was also signed with the Hellenic Bank for supporting local Small to Medium-sized Enterprises (SMEs) and MidCaps. Both loans will help boost economic recovery and create new jobs.

In an EIB press release issued after the signing of the loans, EIB President Werner Hoyer is quoted as saying: “The EIB remains firmly committed to supporting the Cypriot economy and we have clearly shown this by our actions during the crisis and again today.”

“The EU Bank has been a reliable partner for Cyprus over the last years, providing long-term financial support for viable operations, as well as projects in the knowledge economy and innovation. We remain active and committed to supporting economic growth and the creation of new jobs, including in the SME sector which is the backbone of Cyprus’s economy,” President Hoyer added.

The €100 million Framework Loan was signed in support of EU Co-Financing Funds for strategic infrastructure projects to be implemented during the 2014-2020 period. The EIB funding provides affordable long-term borrowing, which can be used as the Cyprus government’s contribution to the implementation of investments in a variety of sectors and will help absorb grants from EU Structural Funds.

The loans include financing windows under the ‘Jobs for Youth’ programme, which offer even more favourable financial terms to eligible SMEs. This EIB product, developed under the dedicated Youth Employment programme launched by the EU Bank in July 2013, is part of a larger initiative of the Member States and the Commission to tackle youth unemployment, following the decision of the European Council in June 2013.

This product targets in particular countries with high unemployment rates amongst young people. In order to benefit from financing under the ‘Jobs for Youth’ window, SMEs in the fields of industry, commercial services and tourism need to fulfil a limited number of conditions, including the employment or training of young people.

The two finance agreements totalling €115 million were signed in Nicosia on Monday in a public ceremony, in the presence of EIB President Werner Hoyer, by the Cyprus Minister of Finance Harris Georgiades, EIB Vice President Jonathan Taylor and Hellenic Bank Chairwoman Irena Georgiadou.

The European Investment Bank (EIB) is the long-term lending institution of the European Union owned by its Member States. It makes long-term finance available for sound investment in order to contribute towards EU policy goals.