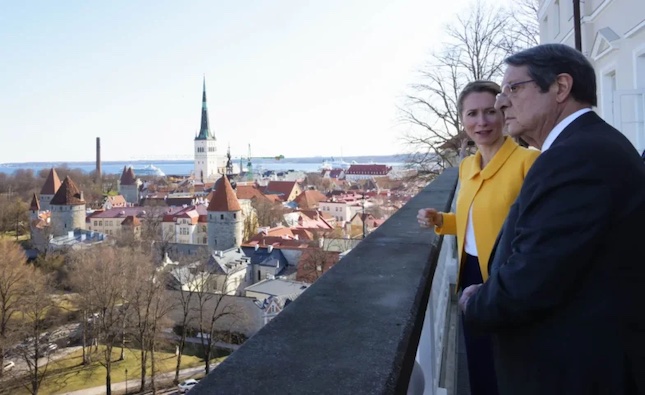 Cyprus and Estonia share a common outlook on many issues, President Nicos Anastasiades said on Friday continuing his official visit there, where he met Prime Minister Kaja Kallas in Tallinn.

“We share a common understanding on a variety of issues, especially on Cyprus and Ukraine,” Anastasiades said, adding that “the Cyprus problem looks identical to the events playing out in Ukraine, that is, the violation of sovereignty and territorial integrity of an internationally recognised state.”

Anastasiades and Kallas signed a memorandum of understanding regarding digital transition, a field of priority for Cyprus as attested by the digital transition policies found in the Cyprus-Tomorrow recovery and resilience plan.

The memorandum aims at strengthening the Cypriot government’s efforts toward the implementation of digital transition reforms and includes cooperation on new areas such as the digitization and reform of population records, social security records and cybersecurity.

The meeting was followed by one between the delegations of the two countries to discuss bilateral relations, the Cyprus problem, the war in Ukraine, immigration, energy security, EU-Turkey relations, and green and digital transition.

“I have extended an open invitation to visit Cyprus and conduct preliminary work in the fields of cybersecurity, digitization of population records and education on modern digital technologies for science professionals,” Kokkinos said on Thursday.

Kokkinos also met with members of the Estonian Association of IT and Telecommunications and paid a visit to Autotek, an automotive tech company, where he was briefed on autonomous vehicle technology and was given a tour in an autonomous vehicle.

“In Cyprus, we can now begin exploring the prospect of introducing driverless cars…from the country’s infrastructure and legislation point of view,” said the deputy minister after his visit.

President Anastasiades and his entourage also paid a visit to the premises of CybExer Technologies, a company active in cybersecurity.