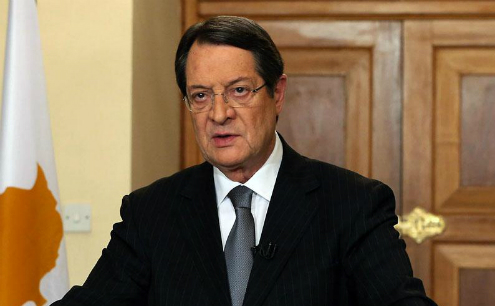 Cyprus has gone through worse situations and current reconstruction efforts will help convert the crisis into an opportunity, says President Anastasides.

Following tough negotiations in Brussels, Cyprus President Nicos Anastasides addressed the nation saying the danger of the bankruptcy of Cyprus has definitely been left behind and the reconstruction efforts of will help convert the crisis into an opportunity to build solid foundations for the future.

In a televised address to the nation on his return from Brussels where he reached political agreement with the Eurogroup on a Cyprus bailout, the president said he understood the “justifiable sense of anger” felt by people regarding the responsibilities of those who led Cyprus to its current predicament. The Council of Ministers are now set to appoint criminal investigators with a “clear and wide-ranging mandate” to find those responsible for bringing Cyprus to the brink, said Anastasiades.

Anastasiades confirmed that Cyprus will introduce “very temporary” restrictions on capital flows when banks reopen this week. “The central bank will implement capital controls on transactions,” he said, adding, “I want to assure you that this will be a very temporarymeasure that will gradually be relaxed.” After his late night televised address, Anastasiades held a meeting with Central Bank governor Panicos Demetriades at the Presidential Palace.

The president said the bailout deal reached overnight Sunday to Monday in frantic talks with the island’s partners in the eurozone was “painful” but the best under the circumstances.

Anastasiades held marathon talks with European Council and Commission Presidents Herman Van Rompuy and Jose Manuel Barroso, the IMF’s Christine Lagarde and representatives of the European Central Bank before a deal was banged out which the Eurogroup rubber stamped in the early hours of Monday morning.

“The agreement that we reached is difficult but, under the circumstances, the best that we could achieve,” said the president. Anastasiades said failure to reach agreement on a rescue package at the weekend would have led to the collapse and bankruptcy of the state.

Regarding thehigh-stakes Brussels visit, he noted there were both “difficult” and “dramatic” moments. “Cyprus was a breath away from economic collapse. Our choices were not easy nor the environment ideal. But through tough negotiations, persistence and a sense of responsibility we reached a result that secures the country’s prospects.”

He added: “Together, the people and political leadership fought a hard battle from which we came out wounded, but upright and determined to make a fresh start.”

Anastasiades said the country can now leave behind the uncertainty and anxiety witnessed in recent months and look to the future with optimism. “From tomorrow, begins a new era for Cyprus. In the next few days, tough decisions will be implemented,” he said, adding, “We have an obligation to stand on our feet and get out of the vicious cycle of recession”.

He assured people that the government will do all it can to provide concrete measures to help those who will suffer the most from the crisis. “As a first measure, we will secure all provident funds of the affected banks.”

Regarding calls to leave the euro currency, he said: “Despite the bitterness and disappointment we all felt regarding the positions some of our partners took against Cyprus, I do not believe distancing ourselves from the European family would be the right response to the crisis.”

Starting from now, Cyprus and its people must begin the reconstruction effort, he said. “Let’s turn the crisis into an opportunity, making a fresh start to build the future on more solid and sound foundations.”

After hours of ‘tense’ negotiations in Brussels, in exchange for a €10 billion rescue package, Anastasiades agreed to wind down Laiki Bank, inflict heavy losses on big depositors, merge the bank’s healthy assets and loans with the Bank of Cyprus (BoC) and accept a haircut on BoC large deposits, the size of which has yet to be announced. All small savers with under €100,000 deposits in both banks will be protected.

Uninsured deposits above €100,000 in both banks will be frozen and used to resolve Laiki's debts and recapitalise the Bank of Cyprus through a deposit/equity conversion. Laiki will effectively close down, with thousands of job losses.

According to Reuters, Eurogroup chairman Jeroen Dijssebloem said the raid on uninsured Laiki depositors is expected to raise €4.2 billion.

The final terms of the agreement will bring a sigh of relief to eurozone leaders who came under heavy criticism for agreeing to hit both insured depositors, guaranteed by EU law, and uninsured depositors in the first agreement reached on March 15. That agreement was subsequently rejected by the Cypriot parliament with MPs effectively branding it depositor theft.

Without an agreement, Cyprus had faced certain banking collapse and potential exit from the European single currency. It still risks a run on banks when they reopen their doors this week.

With the latest agreement, it looks increasingly like Laiki’s big deposits will be all but wiped out while BoC’s big depositors will also take a big hit - an unprecedented step in the eurozone.

Meanwhile, Barroso yesterday announced the creation of a Task Force for Cyprus to provide technical assistance to the Cypriot authorities, with the aim of restarting the real economy of the country. He warned that the challenges facing Cyprus are “immense”, but that Cyprus could count on the EU for support.

“We want to alleviate the social consequences of the economic shock by mobilising funds from EU instruments and by supporting the Cypriot authorities’ efforts to restore financial, economic and social stability.”