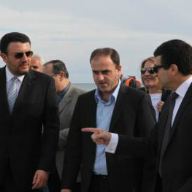 Cyprus and Georgia sign an agreement in the sectors of infrastructure and public works.

The agreement was signed in Nicosia by the Cyprus Minister of Works Tasos Mitsopoulos and Georgian Minister of Regional Development and Infrastructure Davit Narmania. Speaking to the press, Mitsopoulos said that over the past period, there has been a rapid development of bilateral cooperation in various sectors, adding that recently the two countries singed an agreement in the fields of shipping, culture and antiquities. He also said that in the next month, the Georgian Minister of Culture will be visiting Cyprus and together they will inaugurate an archeological site of great importance for Georgia, in the district of Paphos, in the southwest of Cyprus, which was reconstructed by the Antiquities Services of the island.

Mitsopoulos said that the prospects of enhancing bilateral ties appear of great interest, adding that efforts are underway to enhance relations in the areas of trade, financial transactions and tourism. He also said that there has been discussion on the start of direct flights between the two countries.

The Georgian Minister said that his Ministry is working to develop public infrastructure, especially road infrastructure on municipal and regional level, adding that it is very important to study the Cyprus experience, in the framework of European infrastructure and standards and to exchange views on technical works. Narmania said that there is close cooperation with Cyprus and hoped this to develope in other areas as well, such as trade, investment and tourism. The Georgian Minister also met with the Cyprus Archbishop Chrysostomos and Cyprus FM Ioannis Kasoulides.