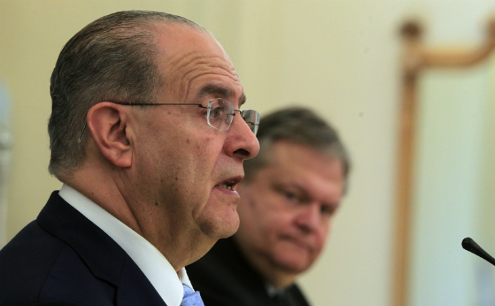 Cyprus and Greece agree to go on with joint energy deals

The drilling in Block 9 of the Cyprus’ exclusive economic zone (EEZ) will proceed as planned Foreign Minister Ioannis Kassoulides said in Athens recently after the first joint meeting with his Greek counterpart Eleftherios Venizelos and the Energy Ministers of both countries.

Kasoulides said that this meeting is proof of the two countries’ willingness to further cooperate in these areas.

“All the countries of the Mediterranean can cooperate, taking advantage of their sea wealth, for the interest and the prosperity of our people,” he added.

The Cypriot minister also said that Ankara should recognise that the interests of the Turkish Cypriots, in relation to Cyprus’ natural resources, have already been safeguarded, within the framework of the negotiations, where there is convergence regarding the fact that these natural resources will constitute a federal responsibility and will be distributed in a fair manner for the benefit of all Cypriots.

Venizelos criticised Turkey’s stance and said that the Barbaros survey ship’s presence in the Cyprus EEZ is illegal and that the Greek government is always in cooperation with the Cypriot government in order to deal with Turkish challenges.

During the meeting, the two sides exchanged information, and discussed strategies on foreign and security policies with regards to the energy and the exploitation of natural resources and the prospect of development, employment and prosperity in the two countries, as well as in the eastern Mediterranean region.

The two Greek ministers were briefed by their Cypriot counterparts on the on going exploration within Cyprus’ EEZ and the Cypriot side was informed on the course of the tenders for offshore fields in the Ionian Sea and the north of Crete.

Both sides also exchanged information regarding the delimitation agreements of the maritime zones of the countries in the region, as well as on the negotiation course between Greece and Turkey, Egypt and Libya.

Greek Energy minister Yiannis Maniatis said that the economic viability and the technical feasibility of the area was thoroughly documented and added that it is the first time, after many decades, that an energy-thirsty Europe has the potential to be a new supply source from the Eastern Mediterranean, with a new route, via the East-Med pipeline, and a new supplier, which will be the Cypriot and Greek resources, and possibly those of Israel or other regions.

Cyprus Energy ministerGiorgos Lakkotrypis referred to the joint initiative undertaken with the European Commission, for the latter to help the two countries look in depth into this ambitious project.
“We are currently looking at all options for viable exploitation of the country’s natural wealth”, Lakkotrypis said.

Meanwhile, Nicosia favoured the criticism of US senator Robert Menendez, Chairman of the Senate Committee on Foreign Relations on the on going occupation of the island by Turkey, the violations of Cyprus’ EEZ and Turkish president Recep Tayyip Erdogan’s recent anti-American statements.