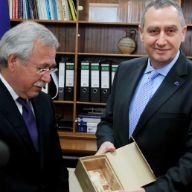 Inter-regional cooperation between Cyprus, Greece, Italy and Israel can provide a useful tool for development, say the interior ministers of Cyprus and Greece.

Greek Minister Yiannis Michelakis, on a visit to the island, met his Cypriot counterpart, at the interior ministry, in Nicosia, while the two Ministers chaired later a meeting between the delegations of the two sides. Main issues on the agenda were the conclusion of a Memorandum of Understanding for the creation of a 'Territorial Cooperation European Club' between the interior ministries of Cyprus, Greece, Italy and Israel, as well as issues concerning Greek citizens residing in Cyprus.

In statements after the meeting Cyprus Interior Minister Hasikos noted that the potential cooperation between the four countries could be a useful tool amid conditions of deep financial crisis. Michelakis said inter-regional cooperation would benefit all four countries, providing financial tools and opportunities to assist development and help vulnerable social groups cope with the impact of the crisis. On issues concerning Greek nationals in Cyprus, Michelakis said he was confident they would be addressed soon. Greece holds the rotating Presidency of the Council of the EU during the first half of 2014.