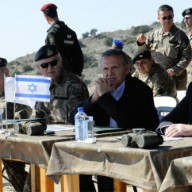 Codenamed ‘Onisilos-Gideon’, the scheduled drill took place inside the Nicosia flight information region (FIR). Israeli fighter jets carried out flybys over areas south of Limassol and Chirokitia. Featuring 32 F15 and F16 jets and six more support aircraft of the Israeli Air Force, the exercise included simulated firing at targets on land and sea along the southern coast from Limassol to Paphos.

In comments to the press, Fotiou thanked his Israeli counterpart Moshe Ya’alon for the “excellent cooperation” of the countries’ respective ministries. “Relations between Cyprus and Israel are entering a new phase,” Fotiou said. “I am confident that the strategic dialogue that began several months ago will benefit both countries and will continue on all areas, including energy security.” In April 2013 the two nations conducted a joint search and rescue (SAR) exercise in the sea area south of the island. The drill was held in line with the bilateral agreement drawn up in February 2012 between the Cyprus and Israel on SAR issues.