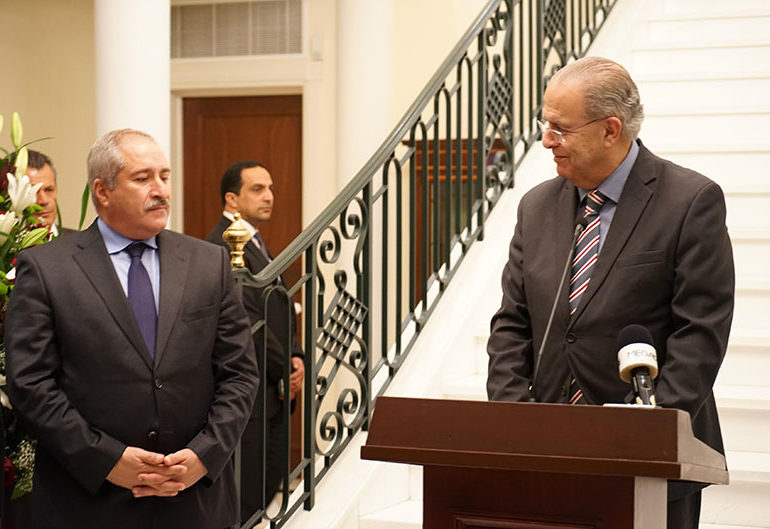 Cyprus and Jordan recently signed an Agreement on the Abolition of Visa Requirements for Holders of Diplomatic and Service Passports, and a programme for cooperation in the fields of education and culture for the years 2017-2020.

The agreement and the programme were signed in Nicosia by Foreign Minister Ioannis Kasoulides and the Deputy Prime Minister and Minister of Foreign Affairs and Expatriates of the Hashemite Kingdom of Jordan, Nasser Judeh, in the framework of Judeh’s visit to Cyprus.

The two ministers had a tête-à-tête meeting, followed by official talks of the delegations of the two countries. During the meeting, Kasoulides briefed Judeh on developments in the Cyprus talks.

They also discussed bilateral relations, the way ahead for a trilateral cooperation of Cyprus, Greece and Jordan, as well as other international and regional issues of common interest.

Judeh said that his visit today takes place as a follow-up of the extremely important visit by the King of Jordan to Cyprus a few months ago. Also, he referred to the conclusion and signing of the two agreements, which will strengthen the bilateral relations. “We are extremely proud of the relations we have with Cyprus historically, politically, economically, socially and practically. We want to do everything in our power to enhance these relations further. We value Cyprus’ contribution in this part of the world and, of course, Cyprus’ extremely important role within the EU and the international stage,” he said.

As regards the trilateral cooperation of Cyprus, Greece and Jordan, Judeh said he hoped a ministerial meeting would take place as soon as possible, leading up to a summit and more substantive discussions.

He lauded the opening of a Jordanian embassy in Nicosia saying it was a natural extension of the special relationships that existed between Jordan and Cyprus.

“We now have a resident Ambassador, we have a resident embassy, and our discussions will continue in a more institutional way, but certainly on the bilateral level,” he added.

In his statements Kasoulides said that a range of bilateral issues were discussed. “We also discussed the further strengthening of the solid and multifaceted relationship between the EU and Jordan. I am very pleased that the EU-Jordan Partnership Priorities 2016-2018 will be signed in Cairo next week,” he said.