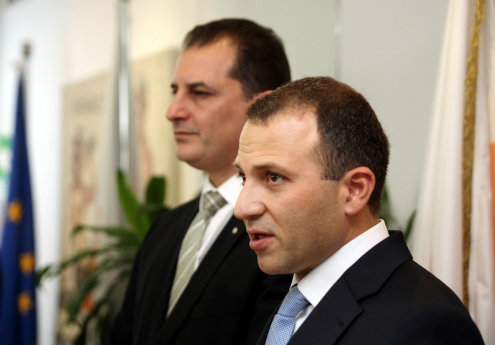 Cyprus and Lebanon will begin negotiations for a unitisation agreement to regulate ownership issues if hydrocarbons are found in the area between the two countries’ EEZ.

Energy Minister Giorgos Lakkotrypis and his Lebanese counterpart Gebran Bassil recently met in Nicosia to discuss hydrocarbon issues. The Cypriot minister announced after the meeting that the two sides have agreed to start discussions on a unitisation agreement with the aim of concluding it “as soon as possible”. For his part, Bassil said: “We are opening a new era of good cooperation between Lebanon and Cyprus in oil and gas.” He added that Lebanon could constitute a potential market for Cypriot gas. Both sides said the meeting was conducted in an excellent climate, reflecting the level of relations between the two countries.

The two ministers briefed each other on the current state of hydrocarbon exploration and exploitation efforts and said they agreed to exchange experiences and knowledge. Bassil said his country will never forget the hospitality offered by Cyprus to its residents “in good and bad times”. The Lebanese minister referred to the historic relations between the two countries, expressing hope that these will be “translated into real economic relations”. He also noted that his country was “open to discuss everything”, adding that Lebanon is keen to correct the mistake – as he put it – relating to the economic zone between Lebanon and Israel. “We hope that with a future understanding, we can correct it and build the future together,” he said.

Lebanon argues the Exclusive Economic Zone (EEZ) agreement signed between Israel and Cyprus, includes disputed waters that Lebanon claims belong to it, but which Israel has included in its own EEZ. Bassil suggested Lebanon could provide Cyprus with an alternative market to export its gas, noting that Beirut is also in need of gas. On the liquefaction plant Cyprus plans to construct at Vassilikos, Bassil said Lebanon sees it in a positive light. “It can be also a possible diversification solution for our gas exports,” he said. The Lebanese minister said the two countries share a “gift from God”, referring to hydrocarbon resources, and expressed hope to utilise them for the benefit of their people. Lebanon-Cyprus relations could also widen to include other areas like water, transportations and even wine, he added.

The announcement on a unitisation agreement could be interpreted as a marked shift forwards in energy relations between the two countries, as Lebanon has so far been extremely hesitant in advancing energy collaboration. Cyprus has signed an EEZ agreement with Egypt, Israel and Lebanon, in an effort to clear the way for peaceful exploration of the hydrocarbons in its own economic zone, but the Lebanese parliament has so far failed to ratify the agreement. Some analysts have suggested pressure from Turkey has helped delay ratification.

Cyprus has also signed a unitisation agreement with Egypt, governing what happens if a hydrocarbons reservoir crosses the median line between the two countries. It also launched negotiations with Israel but a conclusion has yet to be reached.

One energy industry source told the Cyprus Mail yesterday that talk of enhanced relations is just talk at this stage, since Lebanon would first have to ratify the EEZ agreement with Cyprus before a unitisation agreement could be signed, unless they wished to simply agree in principle.