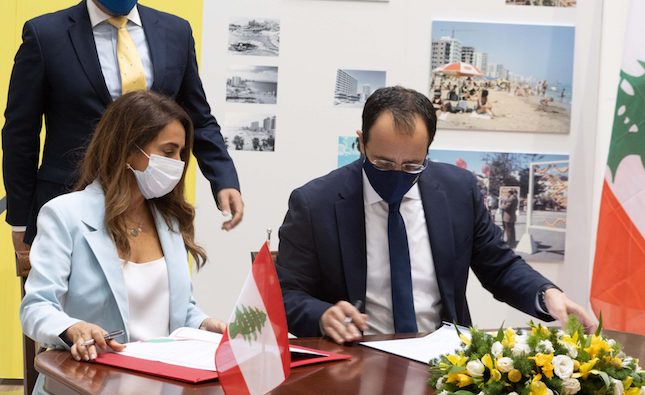 Cyprus and Lebanon sign MoU for oil and gas cooperation

Cyprus and Lebanon signed an MoU agreement for cooperation in the oil and gas sector on Friday during a visit by the neighbouring country’s Defence Minister and Deputy Prime Minister, Zeina Akar.

The Memorandum of Understanding on Cooperation in the Energy Sector was signed by Akar and Foreign Minister Nikos Christodoulides.

The MoU establishes the general framework for the enhancement of cooperation between the competent ministries of the two countries, an official announcement said.

Akar held meetings at the ministries of defence and foreign affairs, while she was also received by President Nicos Anastasiades and House President Annita Demetriou.

Christodoulides and Akar had a tete a tete meeting followed by consultations with the participation of delegations from the two countries.

The consultations covered bilateral relations and the enhancement of bilateral cooperation in particular sectors, the Cyprus problem, and the Famagusta developments as well as regional issues of mutual interest.

Akar also met Defence Minister Charalambos Petrides, and discussed the relations between the two countries in the field of defence and security as well as the current developments in Cyprus and Lebanon.

The Lebanese official expressed the gratitude of her government for Cyprus’ support during the latest developments in Lebanon.

The two ministers also exchanged views on the security situation in the wider Eastern Mediterranean region and other developments in the region.

They agreed to deepen cooperation in the fields of maritime security, especially through the establishment of a Search and Rescue Centre in Beirut, like the one operating in Cyprus.