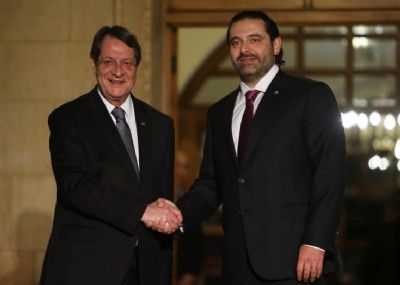 Cyprus and Lebanon to enhance and upgrade bilateral relations

President Nicos Anastasiades and Lebanese Prime Minister Saad Hariri have held “very productive, fruitful and constructive” talks, during which they discussed a number of issues, including ways to enhance bilateral relations, EU-Lebanon ties and developments in efforts to find a comprehensive settlement of the Cyprus problem.

Speaking to the press, at the Presidential Palace, after his meeting with Hariri, Anastasiades announced that Cyprus will be delivering a new military assistance package to the Lebanese Armed Forces.

Welcoming warmly his guest, President Anastasiades said that Cyprus and Lebanon are much more than close neighbours in the Eastern Mediterranean, noting that the history and strong bonds between the two countries and their peoples follows the trail of the Phoenician civilization, and has endured through time and adversity.

“Our relations have grown closer and stronger throughout our long history, precisely because they are anchored on a shared value base and a deep-rooted respect for one another,” he added, according to a press release issued by the Presidency.

Recalling his visit to Lebanon last June, and Hariri’s visit to Nicosia today, Anastasiades said that both constitute ample proof of the close relationship between Lebanon and Cyprus and the joint commitment to further enhancing and upgrading bilateral ties, at the politico-economic sphere, but also people-to-people contacts.

“Our discussions with Prime Minister Hariri today were very productive, fruitful, constructive. We discussed a number of issues, including ways of further advancing our bilateral relations, EU-Lebanon relations and how Cyprus can actively support their enhancement, as well as the latest developments in our efforts for a comprehensive settlement of the Cyprus problem,” he said, adding that they reviewed the progress achieved in bilateral relations since their last meeting in June in an array of areas such as commerce, energy, education and tourism.

“I am happy to note that we are proceeding with the conclusion of pending bilateral agreements. I look forward to hosting a trilateral meeting of Cyprus-Lebanon-Greece in the upcoming weeks or months. We also discussed developments in the wider region. The volatility that characterizes the regional context renders Lebanon’s stability indispensable,” he remarked.

The President said that Nicosia is aware of the many challenges Lebanon is facing and acknowledges the continuous efforts of the country in fighting terrorism. In this context, he noted, “I want to reiterate my country’s commitment in supporting the Lebanese Armed forces, and I am happy to announce that Cyprus will be delivering a new military assistance package to the Lebanese Armed Forces.”

He commended the Government of Lebanon and the Lebanese people for their generosity in hosting more than 1.5 million Syrian refugees, saying that this has an impact on the Lebanese society, especially on the more vulnerable groups.

“I would like to assure you Prime Minister that Cyprus will continue to assist Lebanon in overcoming these challenges, bilaterally and through the channels of the European Union,” he said.

Referring to ongoing efforts to reunited Cyprus, divided since the 1974 Turkish invasion, he said that “Despite the intensive efforts and commitment of our side at Crans Montana, Turkey’s insistence on the issues of security and guarantees, the maintenance of rights of intervention, the presence of foreign troops, contrary to international law and the parameters set by the UN Secretary General, did not allow the Conference to yield any results.”

In spite of the outcome of the UN-led talks at Crans Montana, he continued, “our side remains committed to continuing negotiations for a comprehensive settlement that is in line with international law, the relevant UN Security Council resolutions, as well as EU law. The reunited Cyprus must be a functional, viable, independent sovereign state, able to uphold its regional bridging role.”

This role, he noted, “becomes even more pertinent if one considers the significant challenges our volatile region faces.”

The Cypriot people and the Lebanese people have stood by each other, in solidarity throughout time, he said and pledged to strengthen “our bonds and cooperation, committed to continue working together for the mutual benefit of our two countries and our region.”