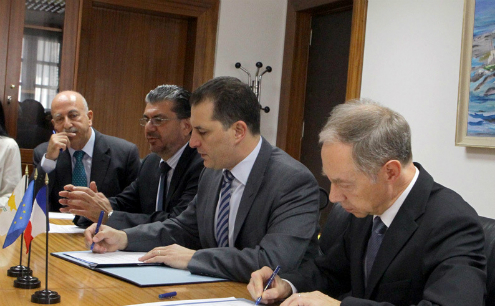 Cyprus and energy giant Total have signed a memorandum of understanding (MoU) for the development of a natural gas liquefaction facility.

The two sides will cooperate on the feasibility of an onshore LNG plant to be built at Vassilikos, with due consideration to Total’s views on the structuring and development of the LNG Project. This follows the award in February to Total of exploration and production-sharing contracts for Blocks 10 and 11 of Cyprus’ Exclusive Economic Zone. The MoU records Total’s support for the monetisation of potential natural gas reserves in Blocks 10 and 11 through a variety of options giving priority to liquefaction and LNG export to European and Asian markets. The MoU is a non-binding, preliminary agreement. Under it, Cyprus and Total undertake to exchange data and views on the development of an LNG project on the island.

Total is a long ways from deciding to monetise any hydrocarbons finds or to pour cash into the LNG terminal. The French energy giant has yet to carry out initial, exploratory drilling in its two prospects; it will likely do so in late 2014 or early 2015. Should it make a discovery, subsequent appraisal – or confirmation – drilling would take place sometime in 2016. Thus a decision to participate in the mooted LNG facility, or more generally a decision to monetise discoveries in any way, won’t come before 2016 or 2017. It’s understood that Total will be prospecting for both natural gas and oil in Block 10, and for natural gas alone in Block 11. When and how Total decide to proceed will also depend on how Noble Energy fares. The Texas-based company has priority in the LNG project, being the first company to sign an MoU with Cyprus.

Noble’s follow-up drilling at the A-2 well in offshore Block 12 yielded an updated estimate of gross resources ranging from 3.6 trillion cubic feet (tcf) of natural gas to 6 tcf, with a mean of approximately 5 tcf. But those quantities may not be enough to render viable the construction of an LNG train. Roughly speaking, one LNG train needs at least 5.5 to 6 tcf of natural gas. Noble is reportedly planning exploratory drilling at additional wells within Block 12 for late next year.

Cyprus has meanwhile approached Israel with a proposal for importing substantial gas quantities from the neighbouring country’s Leviathan field. But any progress on that front is unlikely tocome anytime soon; Tel Aviv must first make a final political decision on its export policy. Noble and Delek, their partners in the Leviathan project, still need to negotiate a lease for the field. Another obstacle in developing Leviathan is an ongoing antitrust probe into the two companies’ powerful position in the Israeli gas market that could potentially delay the project. Meanwhile Cyprus is looking to import small quantities of natural gas for the purpose of local electricity generation – the ‘interim gas solution’.

Nicosia recently approached Israel with a proposal to buy quantities from the Tamar field. But this project, too, could be taken hostage by the antitrust probe in Israel, which covers the Tamar field as well. The Mail learns that back in April, Israel’s then-energy minister Uzi Landau made an offer to supply Cyprus with small quantities of gas from Tamar for electricity production at Vassilikos. For reasons that are not clear, Nicosia at the time failed to strike while the iron was hot, and the window of opportunity was shut. Israel’s new energy minister, Silvan Shalom, has not renewed that offer, and besides there is now the matter of the investigation into alleged antitrust practices by the licensees in Israeli offshore gas fields.

In the meantime, the Mail is told, the Natural Gas Public Company (DEFA) plans to imminently launch a new tender process for interim gas. Last month DEFA scrapped the first tender, having failed to reach an agreement with any of the bidding companies.