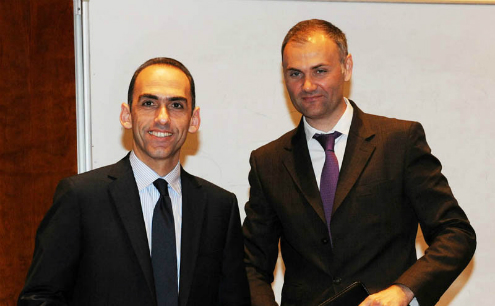 Cyprus and Ukraine step up relations

Cyprus and Ukraine yesterday signed a protocol on the first session of the Joint Commission for Economic, Scientific, Technical and Industrial Cooperation, as part of efforts to further enhance economic relations between the two countries.

Finance Minister Harris Georgiades and his Ukrainian counterpart Yuriy Kolobov signed on behalf of the two countries at a ceremony in Nicosia. Georgiades said the signing of the protocol “reflects the potential for cooperation between the two countries in the traditional sectors of trade, tourism and transport”. At the same time, he added, “it identifies prospects for cooperation in emerging sectors such as energy, health services and a host of other possibilities”. The Cypriot minister referred to the “historical ties” and “long tradition of friendship” binding the two countries, saying: “These ties have in the last decade been complemented by a vibrant and expanding economic cooperation.”

However, the Eurogroup decision of March to impose a massive haircut on all uninsured depositors in the island’s two biggest banks would have gone some way to shaking Ukrainian confidence in Cyprus. According to sources, the Cypriot financial services sector has had trouble convincing Ukrainian businesses that the Eurogroup shock would not be repeated in the future at some point. Acknowledging the bombshell that hit Cyprus’ banking and financial sector, Georgiades said: “Despite the difficult period being experienced, Cyprus remains an excellent destination for professional services.” Yesterday’s agreement confirms this potential to develop further the services sector despite the difficulties, he added.

The Cypriot minister also noted a series of agreements signed over time with Ukraine to build a legal framework that would assist economic relations to expand further, covering sectors of potential cooperation like agriculture, public health, air services, and maritime merchant shipping. The two ministers also signed a memorandum of understanding in the field of digital cartography and geographic information systems (GIS).