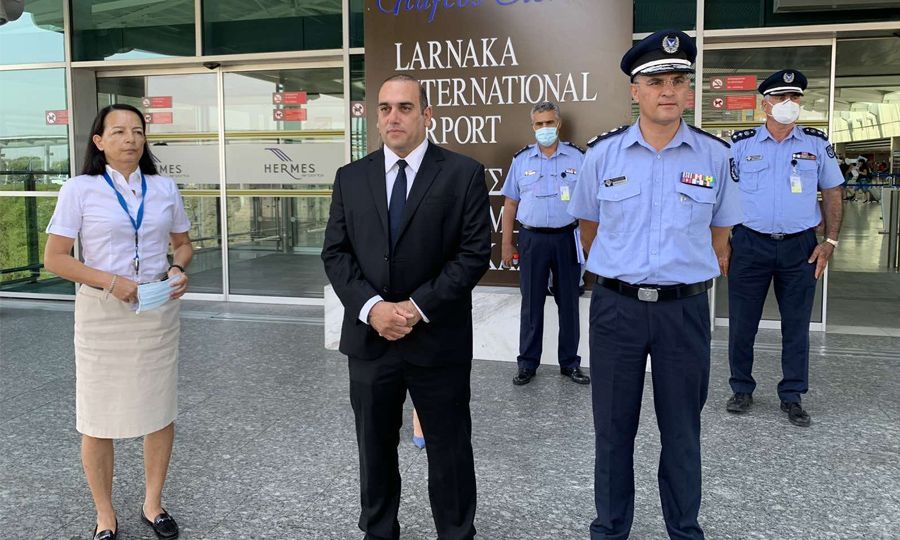 A broad meeting on Monday chaired by transport minister Yiannis Karousos agreed on the need to take action to prevent congestion at Cyprus airports, after viral photos of passengers crammed into each other at the Larnaca airport caused intense public reaction over the health and safety measures being implemented.

Participants of the meeting, which included the chief of police Stelios Papatheodorou, agreed that police presence at airports will be significantly boosted, additional desks will serve passengers in order to reduce waiting time, while express lanes will be re-activated for faster processing.

Karousos said that the additional measures will focus on decongesting Cyprus airports, particularly as regards arrivals.

The health ministry will also be increasing the number of nurses stationed at airport and its services, so that the certificates of arriving passengers, particularly of those arriving from the UK, can be checked efficiently.

Additionally, Karousos said that if at certain points in the day congestion begins to emerge, making social distancing hard, the disembarking of passengers from arriving aircraft will be delayed until crowds grow thinner.

Karousos added that “passenger traffic at airports is increasing daily, we have reached the point where we are handling eight and half thousand passengers, arriving and departing, every day. It makes sense that at some points in the day problems will arise.”

Karousos said that together with his team from the transport ministry, he has been paying visits to the Larnaca airport every day since last Thursday to check that the necessary procedures are being followed.

Videos and photos from ticketed passengers went viral over the weekend, showing hundreds of travelers at Larnaca International Airport crowding each other and violating social distancing rules in arrival halls and escalators or cueing up prior to going through a metal detector.

One video showed over an estimated one hundred arriving passengers from a flight waiting in line to go through a metal detector, with people heard asking fellow travelers to step back and other complaining about the lack of social distancing measures.

On Monday, Karousos said that European guidelines emphasise the need for mask use, “which we have made mandatory, unlike airports abroad where wearing a mask is voluntary.”

He stressed that Cyprus is constantly making improvements as it goes along, noting that “a passenger must not only be safe but also feel safe.”