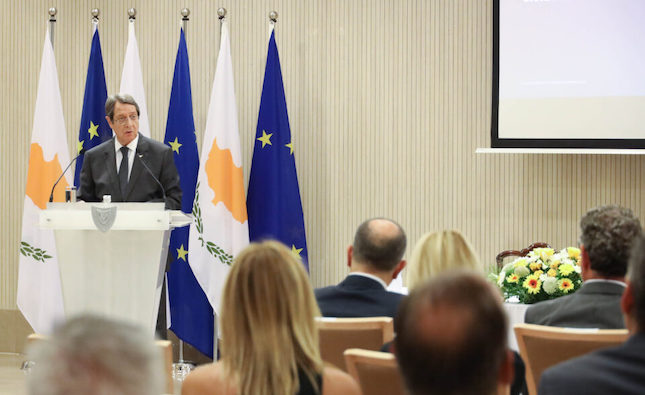 Cyprus aspires to be regional centre of excellence

In his speech, he defended the government’s work to promote tertiary education in the country and the University of Cyprus.

Anastasiades said targeted government policy for higher education was reinforced with the construction of the Stelios Ioannou UCY library, renovation of the Shakolion Health Education Centre, which houses the Medical School and upgrading of the former Pedagogical Academy.

In the planning are projects such as the construction of the Faculty of Engineering, which is underway, the Institute of Cancer Research, the Nikos K. Shacolas Medical School and Health Sciences, and the A.G. Leventis Foundation Department of Biological Sciences building.

Private donations cover a big part of the development and a €194 million loan the government has secured from the European Investment Bank and the Development Bank of the Council of Europe.

The government decided to increase the existing EIB loan by €20 million to cover additional infrastructure projects such as a green park in the heart of the campus; an additional €45 million is under study for the construction of 700 new rooms at student dormitories.

“As a result of our policies, Cyprus is beginning to emerge as a centre for students, academics and researchers, while our Institutions receive praise in university ranking systems of reputable international and European organizations”, said President Anastasiades.

He said the University of Cyprus is ranked among the world’s 400-500 best universities and the top 90 newly founded universities.