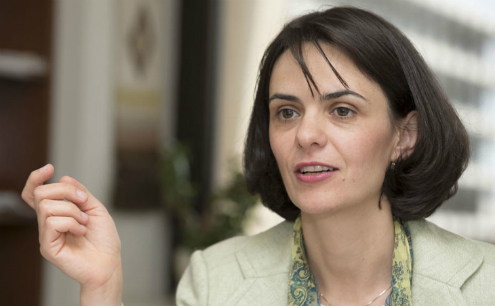 She also said that the IMF expects output to contract by 4.2% rather than 4.8% this year.

“Cyprus’ programme is on track. First, on fiscal policy and as has been the case to date fiscal performance remains better than expected and targets were met with a comfortable margin for the first quarter of this year,” she told a press conference on Monday on the fourth review of Cyprus’ economic programme.

On macroeconomic performance, she said, output in 2013 contracted by 5.4% but it was better than the 6% expected during the last review.

At the same time, confidence has continued to improve and as a result, these macroeconomic projections for the program can be revised, she said. “We know expect output to contract by 4.2% rather than 4.8% this year,” Velculescu noted. Over the medium term, she said, “we do expect some more gradual recovery with growth 0.4% in 2015.”

The IMF official said programme policy implementation has continued, the cooperative sector has been recapitalised and consolidated into 18 institutions. Other banks in the sector are making progress with restructuring according to the respective plan. As a result, significant relaxation of the domestic restrictions took place over previous months, she recalled.

“At the same time, on the structural reform agenda the authorities are advancing their technical and legislative work towards the implementation of key reforms such as the welfare reforms, revenue administration reform,” she noted.

The mission reached staff level agreement on key policy priorities, the first is to deal with the high level of NPLs, where work still is on two fronts, she explained.

“On one side the CBC has agreed to increase supervisory monitoring of bank efforts to increase the operation of capacity and put in place policies in accordance with existing real management framework to deal with the very large level of NPLs,” she said.

On the other hand, the authorities agreed on the implementation of a comprehensive reform of the debt restructuring legal framework, she added.

Second, maintaining sustainability remains a key objective of this programme and the authorities need to continue to prudently execute budget and fiscal targets, which they are successfully doing so far, she said.

Third, structural reforms need to accompany fiscal efforts, she added. As a priority, the authorities agreed to implement welfare reform this year to protect vulnerable groups during the downturn. At the same time, they are continuing efforts to enhance efficiency of revenue administration, revenue collection by fighting tax evasion and reforming the revenue administration.

Finally, the implementation ofthe privatisation plan is needed to increase the efficiency of the economy and lower public debt.