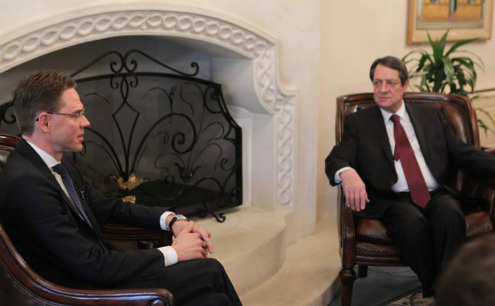 European Commissioner Jyri Katainen, said recently that Cyprus’ image abroad was improving, and its credibility was being restored, making itself more attractive to foreign investment.

The former Finnish Prime Minister and Finance Minister who was in Nicosia to promote the European Commission’s investment initiative said that if Cyprus had the necessary instruments in place, it could benefit from investment in the areas of the small and medium size enterprises, tourism via hotel renovation, and energy.

“Giving you the impression from outside, your country has managed to deal with the crisis very well and this has helped you receive confidence,” he said.

Referring tothe energy sector, he added: “If we can manage to fund a viable project in this area, it could contribute to Europe`s energy security.

Katainen commended Cyprus’s efforts towards economic recovery, adding that the country managed to face the crisis even as internal disagreements existed.

The commissioner, who met President Nicos Anastasiades and members of the parliamentary committee for European and external affairs, said that while Cyprus was located in a troubled region, he hoped external factors would not affect its efforts.