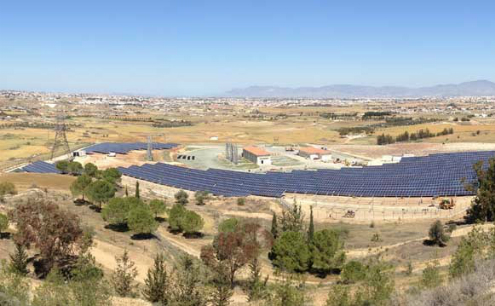 The €3.3 million photovoltaic park project in Cyprus will be operational by May 2014, says the Electricity Authority (EAC).

The park, situated in Tseri, outside the capital city Nicosia is set to produce 5,000 MWh per year of electricity. The park consists of 12,000 solar panels across 4.6 hectares and will save 3,600 tonnes of CO2 emissions a year. The contract was awarded in January 2013, and the park will sell electricity at 8.6 cents per kwh. The cost of the project is €3.3 million.

The Renewable Energy Sources target is to supply 13% of the island’s energy by 2020: around 300MW of power will be generated by wind farms, 192MW will come from photovoltaic (PV) systems, 75MW from concentrated solar thermalplants and 17MW from biomass and biogas utilisation plants.

Cyprus is in a strong position to build on its already high use of solar energy. Around 92% of households are equipped with solar water heaters and 53% of hotels have large systems of this kind. Cyprus is one the highest users per capita of solar water heaters in Europe. Already four large PV parks have been connected to the national grid, generating 1,000,000 kWh.