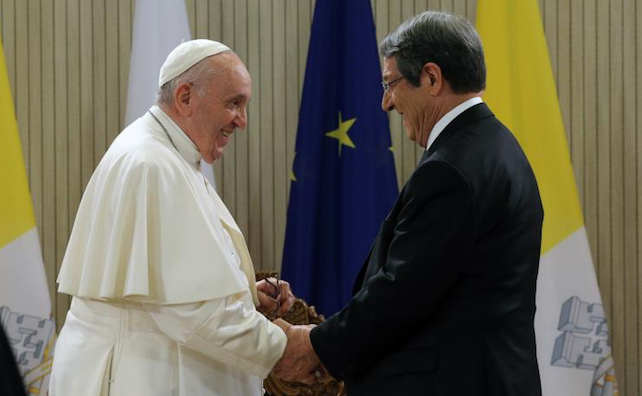 'Cyprus can be Mediterranean role model'

Cyprus is in a position to be a peacemaker, said Pope Francis addressing representatives of the Diplomatic Corps and Civil Society at the Presidential Palace during his official visit to the island.

“Cyprus, as a geographic, historical, cultural and religious crossroads, is in a position to be a peacemaker. May it be a workshop of peace in the Mediterranean,” the Pope said Thursday.

“The European continent needs reconciliation and unity; it needs courage and enthusiasm if it is to move forward.

“For it will not be the walls of fear and the vetoes dictated by nationalist interests that ensure its progress, nor will economic recovery alone serve to guarantee its security and stability.

“May we look to the history of Cyprus to see how encounter and welcome have brought forth good fruits that endure.

“This spirit of enlargement, this ability to look beyond one’s own borders, brings rejuvenation and makes possible the rediscovery of a brilliance that was lost.”

The Pope said he was a pilgrim to a country geographically small but historically great.

“You are an open door, a harbour that unites. Cyprus, as a crossroads of civilizations, has an innate vocation to encounter, favoured by the welcoming character of the Cypriot people.

“Let us nurture hope by the power of gestures, rather than by gestures of power.

“There is a power of gestures, which prepares the way of peace. Not gestures of power, threats of reprisal, and shows of force, but gestures of détente and concrete steps towards dialogue.”

President Nicos Anastasiades said the Pope’s globally accepted leadership and presence in Cyprus stimulate and strengthen the efforts to solve the national problem.

“We look forward, and are confident of the support of the Holy See and to your own, personal, strong intervention, in order to achieve a fair, viable and functional solution to the Cyprus issue,” Anastasiades said.

“I couldn’t help but mention the drama and the anguish of the relatives of those who are still missing.

“Nor, of course, knowing your sensitivities, would I omit the reference to the desecration of cultural and religious monuments in the occupied territories, which brutally violate the universal principles of humanity.”

The President assured the Pope that, despite Turkey’s intransigent attitude over time, “we will continue our struggle for the restoration of human rights and the rule of peace and fraternity between all the people, Greek Cypriots, Turkish Cypriots, and all our brothers of the Maronite, Latin and Armenian religious groups on the island.

“Our vision is to make Cyprus a model of a state of peaceful coexistence and co-creation, successfully overcoming a traumatic past, with full respect for the human rights.”