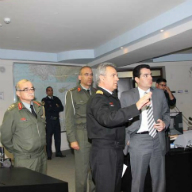 Cyprus can contribute to stability in region, says Defence Minister

Cyprus, Israel, the United States and Greece successfully carry out a joint search and rescue exercise codenamed 'Nemesis – 2014', in an area between Cypriot and Israeli territorial waters.

Defence minister Christoforos Fokaides said he was impressed by the excellent preparation, noting that it confirmed the adequacy and professionalism of the National Guard and all services involved.

He thanked the US, Israel and Greece for participating with their air and naval forces, adding that through such alliances and cooperation, Cyprus can develop and reinforce its geostrategic role as a pillar of stability, security and regional cooperation.

Asked how cooperation will continue with Israel and the US, Fokaides said that similar exercises are being held on a continuous basis, adding: “We are in contact with the respective ministers".

Justice Minister Ionas Nicolaou, who was also present, said that the exercise is a testament to the extent Cyprus cares about its search and rescue centre, as well as the protection of its national interests.

“We will not spare any territory or the least responsibility in relation to issues that concern the sovereignty of the country. The exercise has given us the possibility of evaluating the readiness of services of the Republic of Cyprus which is surelyat a high level,” he added.

The two ministers were accompanied by Commerce, Energy and Tourism minister Giorgos Lakkotrypis, who said that the exercise was impressive.