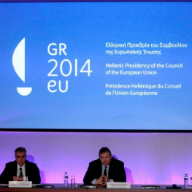 President of Cyprus Nicos Anastasiades and his government are certain that Greece will fully meet the challenge of the Presidency of the EU Council, which it assumed on January 1.

In a written statement, Government Spokesman Christos Stylianides says the challenge is even greater, considering the recession and the financial crisis in Europe. Furthermore, he notes Nicosia is certain that the successful EU Presidency by Athens would greatly benefit the future course of Greece and would lend further clout to the country within and outside the EU. Stylianides expresses certainty that the Greek Presidency will contribute to strengthening social cohesion and solidarity within the European family and at the same time promote solutions to problems that European citizens are facing.

In his statement, Stylianides says the President and the government express, on behalf of the people of Cyprus, wishes to the people and government of Greece and congratulate Athens on assuming the EU Presidency.