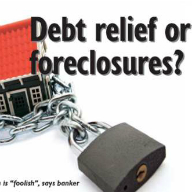 Members of parliament are contemplating passing a bill whereby a first home would be exempt from foreclosure by banks, despite lenders' attempts to reign in non-performing loans.

Members of parliament are contemplating legislation whereby a first home would be exempt from foreclosure by banks, despite the lenders’ attempt to recover as much as they can from non-performing loans (NPLs) estimated to run into several billion euros.

Even the central bank said it might allow a haircut on non-performing loans as part of a restructuring plan with many hoping that a debt relief programme would follow to assist households who can no longer afford to maintain their mortgage repayments.  Whatever the outcome of the current debate, adopting the Icelandic model for debt relief announced last week seems far-fetched for now, as the battered Cyprus banks need to win back the public’s trust and revive confidence in the market, while no other EU or international institution would be prepared to foot the bill.

On the contrary, leading figures from the property industry are now trying to raise public and political support for alternative solutions, such as converting developers’ asset-backed loans that are trapped in the banks and introducing sale-and-leaseback alternatives.  Lakis Tofarides, Cyprus member of the international real estate federation FIABCI said that for the property market to recover and the economy to get going again, the banks need to stabilise first. The best way to do that would be to convert the short-term loans taken out by developers in order to buy the land to build a project into long-term loans.  “Short-term loans were taken out to buy the land. Once the groundbreaking took place, the developer would then take out a long-term loan to finance the project, while deposits and first sales would help pay down the initial loan,” the veteran real estate professional said.

Tofarides said he opposed total debt relief, because that would burden the taxpayer, while it would also prolong debt recovery for the banks that in turn would delay restructuring property loans for ordinary people. He said that press reports that about 6,000 foreclosures were underway were “ludicrous and would never happen.”

The government in Reykjavik unveiled a mortgage debt relief programme worth 150 bln krona (€900 mln), financed by a tax hike on banks and a haircut on debts owed to overseas investors in Iceland’s failed banks.  The plan, said to be the beginning of an ‘economic renaissance’, will apply to 1.36 trln krona (€8.3 bln) in mortgages linked to inflation, with a maximum limit of 4 mln krona (€24,360) per household. Mortgage holders will also be given tax breaks to encourage them to use pension savings to pay down their borrowing.  The government said it would finance the measure through tax hikes on financial institutions and a haircut on around €2.9 bln in debts owed to overseas investors in Iceland’s failed banks, which collapsed in late 2008.

Those debts are now mainly held by hedge funds, which bought them at a deep discount, similar to investors seeking to buy Bank of Cyprus deposits-turned-shares at a discountof 30-40 cents on the euro. In any case, deputies in Cyprus are trying to invite an expert from Iceland in order to testify on the mortgage debt relief programme announced there.  Property consultant and chartered surveyor Charalambos Petrides said that there were other alternatives.  He said that one measure that is gaining popularity is the sale-and-leaseback, whereby the bank would take the securitised mortgage and allow the tenant to stay on the property, paying back the remainder of the loan in the form of a rent.  “This way, banks would be able to change these mortgaged properties from liabilities to assets,” he said, adding that billions that remain trapped in the banks could be released.  Tofarides and Petrides said that their suggestions, as well as others, had been discussed with technocrats from the Troika of international lenders, who assured them that banks do not need to be burdened with more NPLs, mortgages and assets they cannot get rid of.

John Hourican, the new CEO at the Bank of Cyprus, told shareholders on November 31 that the centralbank’s definition of NPLs was ‘foolish’ and that billions remained trapped in banks, unable to generate business. Any loan that has not been serviced for 90 days is now termed an NPL, while six months have to pass from the resumption of repayments in order for it to be reinstated as a performing loan.  This was a vicious cycle that would prolong recession, unless the old definition is reinstated, Hourican said.

He said that there needs to be a culture change, whereby loans should no longer be asset-backed or linked to mortgages, but must first be checked if the borrower is viable and has a healthy debt-repayment plan in place.

The central bank, meanwhile, issued a stark warning to banks to change their attitude towards borrowers in efforts to prevent the seizure and subsequent sale of primary homes.  The central bank has called on banks to help borrowers restructure their mortgages and even went as far as giving notice that there could be a haircut on non-performing loans in efforts to facilitate their repayment.  A central bank source was quoted as saying that that the 30 largest borrowers have bank debts totalling €6 bln and that priority will be given to the seizure and sale of their property.  Last week, the central bank issued a clarification saying that the option for a full or partial debt write off “must be used only in extreme cases.”

Meanwhile, the CyprusPropertyNews web portal http://www.news.cyprus-property-buyers.com/ reported that liquidators CRI appointed to handle six of the eight companies comprising the Froiber Group has completed the work necessary to get title deeds issued for eight apartment buildings and that efforts are focused on the rest.