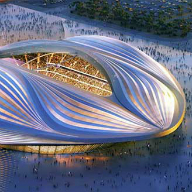 A joint venture led by Cyprus-based contractor Joannou & Paraskevaides (J&P) has been awarded the contract to build the new Qatar Foundation (QF) Stadium for the 2022 World Cup.

The 40,000-seating-capacity stadium, located in the Education City, is the fifth to enter the main works stage. It is slated for completion in 2019, three years before the 2022 World Cup, reported the Doha News.

The venue’s design resembles a ‘diamond in the desert’ and will feature geometric patterns that appear to change colour as the sun arcs across the sky.

The joint venture, which comprises J&P Qatar, Conspel Qatar, J&P Avax SA and J&P (Overseas), will build the QF stadium that is set to host matches up to the quarter-final stage, said the report.

The project is being delivered in conjunction with Astad Project Management, a wholly-owned Qatari Company, which looks after project and construction management and construction supervision, stated the report, citing Hassan Al Thawadi, secretary general of The Supreme Committee for Delivery & Legacy (SC).

“Over the next four years, we will be working closely with our new partners to ensure we deliver an outstanding, legacy-oriented stadium at Education City that will serve the community long after the last ball is kicked,” he added.