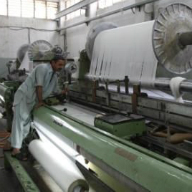 The Industrial Output Prices Index for January 2014 recorded a decrease in Cyprus, as well as in the Eurozone and the EU, according to Eurostat.