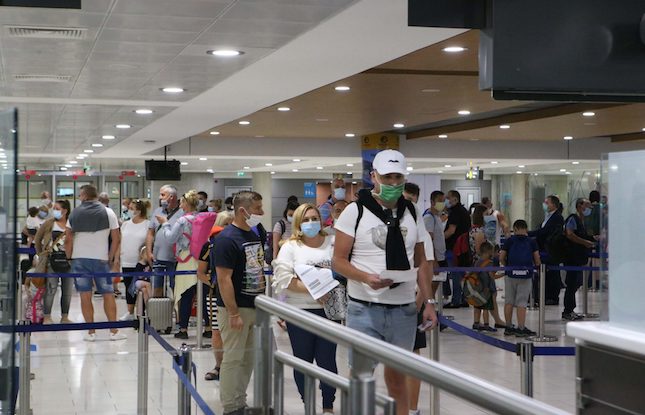 After the blow inflicted by the UK’s decision to delay the easing of coronavirus measures in England, Deputy Tourism Minister Savvas Perdios reiterated on Wednesday that Cyprus deserves to be moved to the green list of tourist destinations from the current amber category.

Meanwhile, airlines also joined in the chorus of disappointment towards the UK government and on Wednesday renewed their calls on Britain to restart international travel.

Currently, no EU country features on the UK’s green list, including Cyprus, which, according to Perdios can rely on a satisfactory epidemiological picture.

Perdios called the lost income suffered by the people working in the tourism and hospitality industry tragic.

“We feel that we deserve the green category as soon as possible,” he told the Guardian newspaper.

“Our positivity rate but also our R number is lower than in the UK itself, so we have better statistics than the UK and we have the best statistics in the Mediterranean for variants,” he said, adding to the mix a positive vaccination drive.

“If we’re going to be sat here having these great stats but not being recognised for all the work we have done, it’s just going to lead to disappointment.”

Perdios travelled to London June 1 and briefed UK officials on the island’s improved Covid-19 data ahead of the update of the UK country rating list on June 3 which saw no countries added to the green list and Portugal downgraded to amber.

The next rating will take place on June 28. However, following PM Boris Johnson’s decision on Monday to delay the lifting of all legal restrictions on social contact, the possibilities of the UK adding Cyprus to the list of safe countries for travel later this month seem scarce.

This would mean delaying the arrival of British holidaymakers by another four weeks, effectively losing the entire month of July, crucial for the battered tourism industry.

“The reality is that as long as this instability continues with regard to categorisation, people don’t know what to book. At the very least I think it would not be a bad idea if an expected date was given,” Perdios said.

“More of an effort needs to be made to show people what might be possible going forward. It’s as if we have told everybody ‘stop booking, stop looking, stop dreaming’ and just wait for the country to turn green. People cannot book their holydays abroad at the last minute,” Perdios said.

His comments were echoed by the chairman of the Association of Cyprus Tourist Enterprises (Stek) Akis Vavlitis, who said the UK is making the situation in Cyprus very difficult.

“Once again, this is turning out to be another unpredictable year for us. We can’t estimate how many people will visit Cyprus this summer because the rules change every day,” he told the Cyprus News Agency on Wednesday.

Vavlitis said that until the island is placed in the green list, the number of visitors from the UK will remain very low. He also hinted that the UK government might have another reason for keeping Britons from travelling abroad.

“After Brexit, the UK economy is facing a multitude of problems, which they have swept under a carpet represented by the Covid-19 pandemic. Preventing Britons from spending their money abroad might be one of the items on the UK government’s agenda,” Vavlits said.

However, he also said that very few hotels in the country are planning to close after the Kataklysmos weekend, as hoteliers are still hopeful to see the situation improve in July.

“Nevertheless, the situation will be very difficult for hoteliers. After being downgraded to the amber category, hotels in Portugal reduced their prices by up to 66 per cent.

“The same is happening in Spain and Greece, so I foresee it happening here too. Hotels this year will end up making much less money even if Britons are allowed to visit,” Vavlitis concluded.

The Cyprus Hotel Association (Pasyxe) said on Wednesday it was slightly more optimistic.

While they acknowledged that July, like June, would be a dead month, Pasyxe’s director deneral Phylokypros Roussounides said that the main goal for hoteliers is to make this year better than the last one.

“We are cautiously optimistic that an increased flow of foreign travellers, especially Britons, will arrive in Cyprus by late July or by the beginning of August.

They are also hoping for an extended season to bring numbers up.

“I think the tourism season might be extended until the end of November, so we are looking at a better year compared to 2020,” he said.

The hoteliers’ comments came as airlines also joined in the chorus of disappointment towards the UK government and renewed their calls on Britain to restart international travel.

British Airways, easyJet and Ryanair said Britain’s strict quarantine rules which discourage travel will deepen the industry’s crisis as July and August, the months when the airlines make most of their profits, approach.

EU countries have agreed to an easing of travel restrictions from July 1 that will allow fully vaccinated tourists to avoid tests or quarantines.

“The UK will get left behind because I do see Europe actually moving at a quicker pace to open up,” British Airways Chief Executive Sean Doyle said at an online conference on Wednesday.

“We should be acknowledging that vaccinated travellers have an inherently lower risk when they travel than those who don’t. It’s crazy not to try and reap that dividend.”

Ryanair CEO Michael O’Leary said in a statement that Britain should allow vaccinated UK and EU citizens to travel between the UK and the European Union without the need for quarantine and tests.

EasyJet added its voice to the mix saying it was moving planes from the UK, usually its biggest market, to Europe as that is now where most of its bookings are coming from.

Planes that would usually fly from the Britain to Palma in Mallorca, for example, are now flying from Berlin to the Spanish island instead, EasyJet said.