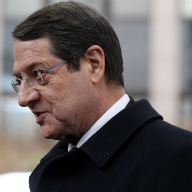 “My presence here is proof of the unwavering decision of my government for Cyprus to become a full and active member of CERN, as well as of the importance that we have placed on ensuring that this event is a success, leading to the establishment of tangible business links between Cyprus and CERN.”

Anastasiades’ address was delivered by Energy Minister George Lakkotrypis at an event organised by the chamber of commerce to inform Cypriot enterprises on the procedures CERN follows regarding the purchases of services and products.

“At a period when the country is faced with so many challenges, my government has acknowledged fully the benefits associated with the maximisation of the commercial potential of research and innovation,” the President said.

He added that by investing in research and innovation, knowledge is created, competitiveness increases and products and services improve. As a result, enterprises can operate with increased effectiveness and success at an international level.

“Cyprus enterprises engaged with technological products and services, are today improving at a very fast pace due to their participation in European funding schemes and projects, that enable them to collaborate with, learn from and compare themselves to their European counterparts,” Anastasiades said.

In fact, the president pointed out that the government actively encourages and supports technological excellence for both enterprises and research centres, through various funding schemes. “Achieving contract awards from CERN, based on their performance and, of course, on the lowest possible overall cost of their offer, will be recognition of success that will have positive effects on the efforts made by the government for the economic recovery of the country.”

“I have no doubt that…collaboration opportunities will be identified, as the Cypriot enterprises participating will explore ways that their products, services and expertise can be useful to CERN’s work.”

On his part, chairman of the chamber Phidias Pilides highlighted the prospects that could arise from cooperation between Cypriot enterprises and CERN. “In an era where exporting and creating international business partnerships is a priority for our country, the prospect of cooperation with CERN opens new opportunities for Cyprus,” Pilides said.

Professor Emmanuel Tsesmelis said Cyprus and CERN are engaged in a dialogue, which has advanced, on the island’s accession to CERN. “We signed an agreement in 2012 and we hope that the Cyprus House of Representatives will ratify very soon this agreement so that we can welcome Cyprus as a full member of CERN shortly,” Tsesmelis said.