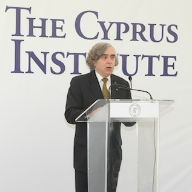 Efforts to restart the economy need to be based on research, technology and innovation, says President Nicos Anastasiades.

Speaking during the inauguration of the new Innovative Technologies Laboratory at the Cyprus Institute (CyI), in Nicosia, the President noted that sustainable development, based on research and innovation, will create new jobs and will contribute to prosperity.

President Anastasiades announced moreover that the government decided to allot buildings belonging to former Higher Technological Institute to the Cyprus Institute, to house some of its laboratories.

He also announced the reopening of the now closed study room under CyI management that will be open to the scientific community.

This infrastructure, together with the new laboratory, will contribute to the Institute’s development in the years to come, facilitating research and innovation efforts in Cyprus, the President said.

The event was also addressed by the President of CyI Costas Papanicolas, the Chair ofthe Board of Trustees Edouard Brezin and the Chair of the Executive Committee Andreas Pittas. All speakers thanked the government for its support to the Institute and noted the building`s innovative infrastructure.

Finally, the President handed commemorative awards to Honorary Trustees and unveiled an inaugural plaque at the building’s entrance.