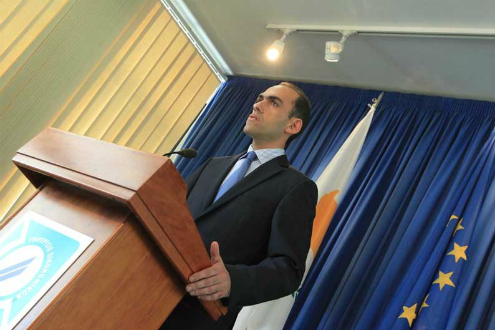 At an event entitled 'One year of the Cypriot programme: A review', the Minister reviewed the events that led to the Cyprus economic programme under the Memorandum of Understanding with the Troika (IMF, European Commission, ECB) and appeared cautiously optimistic about the state of the Cypriot economy, but also about the results of the stress - tests for the Cypriot banks.

He said that the Cypriot economy has proved more resilient than expected and Cypriot spreads are now at the lowest level since 2011. However, he pointed out that there are still many challenges, and in particular high unemployment, which has reached 17%. "We have a plan, let’s remain focused on that and let’s do our job," said Georgiades.

The representative of the European Commission in Troika Maarten Verwey said that there was delay from the previous Cypriot authorities in taking action, and referred to the attempt to obtain a loan from Russia. He added that the crisis management in Cypriot banks had failed and that the only available tools left on the table seemed like painful solutions. He agreed with the Minister of Finance that the Cypriot economy has proved more resilient than anticipated by its international lenders. He added that there are still significant challenges for Cyprus, such as restoring confidence in the banking sector, managing non-performing loans, attracting foreign investment and ending restrictions on capital movement.

A €10 billion bailout agreed between Cyprus and the Troika in late March 2013 featured a haircut of 47.5% of uninsured deposits in Bank of Cyprus in a bid to recapitalize the bank, while Cyprus Popular Bank, the island's second larger lender, has been wound down with its good part (insured deposits and assets) absorbed by Bank of Cyprus.