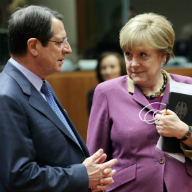 President Anastasiades is on a four-day state visit to Berlin, where he will meet with German Chancellor Merkel to discuss the economy, the Cyprus issue and energy.

Government spokesman Nikos Christodoulides said the agenda of the talks in Germany revolve around four main issues: the Cyprus problem, the economy, the ongoing crisis in Ukraine and energy.

Christodoulides said the president would brief the German chancellor on the on going reunification talks in Cyprus, and would be asking for Berlin’s support in Nicosia’s bid to upgrade the role of the EU in the peace drive as well as pursuing confidence-building measures between the island’s two communities.

On economic issues – understood to be the main thrust of the visit – Cyprus will attempt to clinch a deal securing financial backing for Cypriot small-and-medium enterprises via a low-interest loan.

Christodoulides said the two governments had already laid the groundwork for such an agreement during preparatory contacts prior to Anastasiades’ visit.

The issue would be discussed at a scheduled meeting in Berlin between finance minister Harris Georgiades and his German counterpart Wolfgang Schauble.

Regarding the political crisis in Ukraine, Christodoulides said Cyprus and Germany are in favour of a diplomacy-based solution. Both governments are in agreement that escalating EU sanctions against Russia must be avoided. Nicosia is concerned that the Russian-Ukrainian situation might impact tourist arrivals from both these countries.

Germany, with strong trade ties to Russia, is pressing for a second international conference to bring Russia and Ukraine together with the United States and European Union to settle the dispute.

The fourth major item on the agenda is energy, Christodoulides said, given that the Germans have “expressed interest” in a mooted natural gas liquefaction plant in Cyprus. He did not elaborate, but was understood to be alluding to Deutsche Bank’s interest in managing the financing of the LNG facility. A delegation of the German bank was in Cyprus last month exploring possible funding options for the gas project.

Meanwhile political parties had their own ideas about what the president should discuss with the German Chancellor. In a statement, opposition DIKO urged Anastasiades to press the matter of Cypriot banks’ high level of non-performing loans (NPLs) as well as the Emergency Liquidity Assistance (ELA) credit line.

DIKO said the president must insist on a laxer definition of NPLs, as the current definition has resulted in an increase of bad loans on the banks’ balance sheets. On the ELA issue, DIKO proposed that this funding be transformed into a long-term bond, which would allow banks to clear their books and release much-needed liquidity to the market.