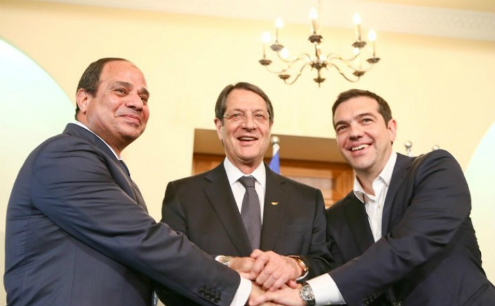 A third Trilateral Summit between Greece, Egypt and Cyprus in Athens has effectively solidified the foundations of the cooperation between the neighbouring countries in the years to come.

“We remain committed to effectively promoting our common values and interests and continuing to work towards enhancing our tripartite consultation at all levels,” it added.

President Nicos Anastasiades, his Egyptian counterpart Abdel Fattah Al-Sisi and Greek Prime Minister Alexis Tsipras also re-emphasize that the discovery of important hydrocarbon reserves in the Eastern Mediterranean can serve as a catalyst for peace and stability in the region. Including the most recent one – that in ‘Zohr’ gas field in Egypt’s Exclusive Economic Zone.

“This objective would be better served through the adherence by the countries of the region to well established principles of international law,” the declaration said.

“Recognising the universal character of the UN Convention on the Law of the Sea (UNCLOS) to which all three countriesare State-Parties, we agree to accelerate negotiations on the outstanding issues related to the delimitation of our three counties’ adjacent maritime zones,” it added.

Recognising that maritime industry and tourism are vital components of the economy of their countries, the three leaders also agreed to continue working closely together with a view to strengthening cooperation on common projects.

With the involvement of both state and private actors, including developing joint tourism packages and cruises and enhancing the maritime connection between the three countries for the transfer of both cargo and passengers.

In addition, the three leaders expressed concern with regard to the destruction of cultural heritage of countries in the Middle East as well as the organized looting and illicit trafficking of cultural objects, carried out, among others, by ISIS.

“We agree to intensify our work towards tackling this alarming phenomenon and underline the need for a robust UNSC Resolution envisioning world-wide limitations on the trade and transfer of artefacts from all conflict zones.”

“With the burden of proof of legitimate trade remaining upon the traders, auction houses and buyers and not on the originating states.”