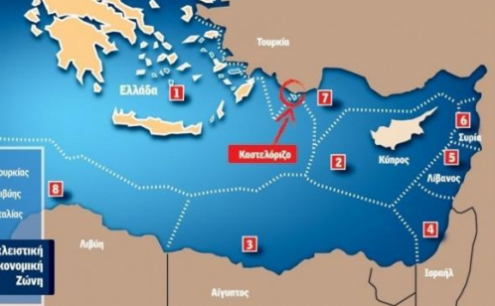 Cyprus and Egypt will be ready in the near future to sign an agreement on a direct undersea natural gas pipeline from Cyprus’ exclusive economic zone to a liquefied natural gas plant in Egypt, Foreign Minister Nicos Christodoulides said.

The minister, visiting Cairo on Tuesday, said: “We believe that there is a bright future for the cooperation between Cyprus and Egypt in the field of hydrocarbons as our cooperation is based on solid foundations.”

In a joint press conference after the meeting, Egypt’s Foreign Minister Sameh Shoukry said it was important to finalise measures related to the government agreement on constructing gas pipelines between both countries.

In return, Christodoulides said Cyprus was working towards accomplishing this, in line with the set timetable.

The two ministers highlighted the excellent relations between the two countries and agreed to further cooperation in areas such as energy, finance and freight.

Shoukry expressed Egypt’s keenness to continue working with Cyprus and other partners in the European Union on achieving mutual interests, based on principles of mutual respect and non-intervention in the domestic affairs of others.

“Our own intensive exchanges and open channels of communication are a mirror image of the excellent relations Cyprus and Egypt maintain at all levels. They also highlight our strong political will to further extend and strengthen bilateral cooperation, building on the impressive momentum created under the leadership of our two presidents,” Christodoulides said.

Trilateral relations between Cyprus, Egypt and Greece were also discussed, with the suggestion to include more countries.

Christodoulides is expected to meet Egypt’s prime minister and the president of parliament on Wednesday while President Nicos Anastasiades is set to visit Egypt by the end of the month.

Earlier in the day, in an interview with Egyptian newspaper Al-Masry Al-Youm ahead of his visit, Christodoulides said energy cooperation between our two countries forms an indispensable part of our common vision for creating conditions of stability and security in the Eastern Mediterranean.

“We expect that in the near future our countries will be ready to sign an intergovernmental agreement concerning a direct undersea natural gas pipeline from Cyprus’ EEZ to an LNG plant in Egypt. The stakeholders involved are in the process of negotiating the terms of the natural gas sale and the purchase agreements, and hopefully, we will soon have positive results.”

Christodoulides said that during his working visit in Cairo he will discuss bilateral relations, the trilateral cooperation between Cyprus Egypt and Greece, energy issues, the Cyprus problem, EU – Egypt relations, developments in the Eastern Mediterranean, and regional issues.

His visit is also taking place in preparation for the upcoming visit of President Nicos Anastasiades to Egypt.

“It is no secret that both Cyprus and Egypt have common challenges to face in a number of issues and these can only be addressed through joint and coordinated actions,” the Cypriot foreign minister said. “We are particularly happy to observe that there is a momentum in taking our cooperation forward in a wide array of areas, which includes coordination in international fora. Our aim is to further strengthen and deepen our cooperation in all areas of common interest.”

Asked how Nicosia will deal with a possible Turkish drilling in Cyprus’ waters, he said Cyprus was working to prevent such activity which will constitute another serious violation of international law, as well as a clear indication of Turkey’s unwillingness to contribute to the settlement of the Cyprus issue.