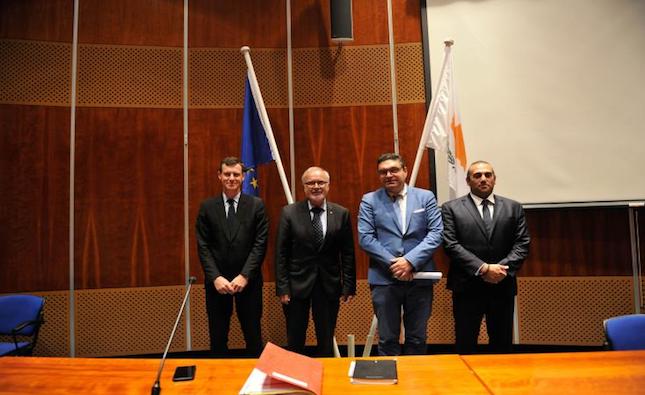 It includes first financing from the EIB’s European Guarantee and new financing for SMEs through the Cyprus Entrepreneurship Fund.

The EIB and EIF agreed that new financing is available for most Cypriot economy sectors, including tourism, agriculture, manufacturing and services companies most impacted by economic, trade and health challenges related to Covid-19, managed by Cypriot banks and launched in the coming weeks.

Hoyer confirmed €212 million of signed operations and €150 million of operations approved by the EIB Group for road safety and financing for Cypriot companies impacted by Covid-19.

“I can formally agree the largest ever EIB support for transport investment in Cyprus.

“The €112 million new EIB financing will accelerate the roll-out of road safety cameras at accident blackspots across the country and support 30km of key road improvements throughout Cyprus, in Nicosia, Limassol, Paphos and Vasilikos.”

As part of the EIB’s rapid response to Covid-19, it will support €250 million of new financing for Cypriot entrepreneurs and businesses most impacted by the pandemic.

“This will assist most sectors of the Cypriot economy, including enabling tourism, agriculture, manufacturing and services companies most impacted by economic, trade and health challenges related to Covid-19 to invest and protect jobs.”

They include €200 million of targeted business financing under the Cyprus Entrepreneurship Scheme II designed to address specific challenges facing SMEs and Midcap companies.

Hoyer also confirmed approval by the EIF Board of €50 million new business financing in Cyprus, representing the first in Cyprus to be backed by the €25 billion European Guarantee Fund.

EIB funding transport in Cyprus consists of constructing and improving roads and motorways, investing in fixed and mobile speed cameras.

The project is estimated to generate approximately 1,500 jobs of temporary employment during the implementation phase.

The weighted average of the economic rate of return on the main road projects was estimated at nearly 12%, while all individual project components yield an economical rate of return above 7%, indicating expected economic growth and a good social return on investment.

“The support will accelerate the use of speed enforcement cameras, decrease transport bottlenecks of key routes, improve the connectivity of isolated areas, enhance the safety of the Cypriot road network and reduce road fatalities in our country,” Karousos said.

One of those projects is Nicosia’s South Orbital Motorway, a key road project serving the mobility needs of the capital and surrounding areas with a capital investment of €81.7 million.

Other road works are the Limassol-Saittas Motorway and the first phase of the Paphos-Polis Chrysochous Motorway.

Implementations of Speed Enforcement Cameras has a capital investment of €40.6 million.