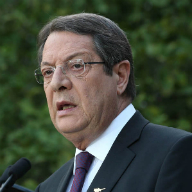 Cyprus' full participation in the EU provides valuable help to the states efforts to meet any future challenges, either financial or political, says President Anastasiades.

Speaking to CNA, President Anastasiades referred to the Cyprus problem, noting that Nicosia can now use the tools offered by the EU to seek a solution, as fair as possible, pointing out that before joining the EU there was no such possibility.

As regards the decisions on Cyprus during last March’s Eurogroup meeting, President Anastasiades said that Cyprus was treated as a small and vulnerable EU member state and was possibly used as an experiment for the new EU policy for the rescue of banks in the form of a bail in.

However, he stressed that despite the harsh decisions, Cyprus found an economic solution within the EU, since there was no other option available.

"Our EU accession was the greatest achievement since the proclamation of the independence of Cyprus. Our membership in a family of developed and democratic states, gave us the opportunity both as a society and as a state to enter into a process of reforms and modernization based on the EU acquis communautaire”, he said.

President Anastasiades added that Cyprus can address better the current political, social and economic challenges within the EU which offers a wider context of ideas, opportunities and alliances.

Asked whether Cyprus’ EU membership can still work as a catalyst for the solution of the Cyprus problem, the President said that "the accession of the entire territory of Cyprus to the EU – with the suspension of the acquis communautaire in the areas where the Cypriot government does not exercise effective control – was the best response to Turkey, which considered the Cyprus problem already solved through the illegal and unnatural division of the island in August 1974”.

"The Cyprus issue is not yet solved, but the accession of Cyprus to the EU, in a parallel track with the accession course of Turkey, have redefined the parameters of the Cyprus problem”, the President pointed out.

The Cyprus issue, he went on to note, works as a precondition for Turkey’s EU membership, while the solution of the Cyprus problem, is a necessary component to restore geopolitical stability in our region.

He recalled that a new effort to solve the Cyprus problem began recently, expressing hope that it yields results.

President Anastasiades also said that the government has asked for a more active and substantive EU involvement in Cyprus, adding that this has been achieved to a great extent.

He added that the European acquis communautaire is an important tool that can contribute to the efforts to reach and implement a viable solution of the Cyprus problem, which will be based on human rights and the fundamental freedoms.

"It is the implementation of the acquis that will ensure the above”, he said, adding that the government is determined to fully exploit this opportunity.

He noted that "we can use the tools offered by the EU to seek a solution, as fair as possible. Prior to our accession to the EU we had no such opportunity”.

Asked whether last March’s Eurogroup decisions on Cyprus had an impact on Cyprus’ relations with the EU, President Anastasiades said that "we must be honest. Cyprus was treated - in the context of the economic crisis - as a small and vulnerable EU Member State and possibly was used as an experiment for the new EU policy for the rescue of banks with bail-in, which now seems to be formed at European level`.

He told CNA that at the same time, "we should realise that the concept of solidarity coexists alongside with responsibility.”

"Our economy reached a limit, not because of the EU but because of our own mistakes and omissions”, he went on to explain.

Anastasiades pointed out that the solution found was a difficult one, but it was found within the EU, adding that there was no other choice.

He recalled that most of the financial assistance given to Cyprus by the Troika comes from theEU, and wondered how Cyprus would have found the amount it needed if it were not a member of the EU and the eurozone.

"The decisions were tough and the consequences even tougher. But I cannot imagine where Cyprus would have been today, had it not been for those decisions”, he said.

Concluding, the President said that "Cyprus’ future is linked with the future of the EU itself”, adding that "our full participation in the EU in all areas (economy, politics, social issues) provides the most valuable help we could ever have to meet future challenges”.

The Republic of Cyprus became a full EU member state in May 2004. Cyprus has been divided since the Turkish invasion of 1974. UN-backed talks are currently underway with the aim to reunite the island under a federal roof.