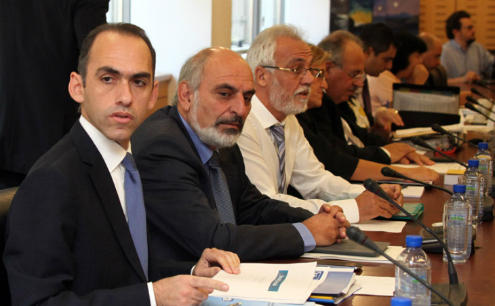 The fiscal deficit is projected to be lower in 2014 than the 3% threshold set by the EU and closer to 2.5%, said the Finance Minister recently.

Addressing the House Financecommittee, which held a kick-off session for the 2015 budget discussion, Georgiades said the projections represent dramatic improvements on Troika estimates.

The International Monetary Fund (IMF) had revised its estimate of the government’s 2014 fiscal deficit to 4.4%, and had the country’s public debt peaking at 126% in 2015, following its last progress review of the Cyprus economic adjustment programme.

But Thursday’s announcement of Eurostat’s upward revision of Cyprus GDP by 9.8% meant a reduction in the debt-to-GDP ratio. “2015 will be the year of recovery,” Georgiades told deputies. “However, we are not yet at the desired level. Just because we are doing better does not mean we are doing well,” he added. A primary surplus of 0.5% is predicted.

Georgiades affirmed the government’s determination to continue economic consolidation efforts, noting that it is the path to exiting the three-year programme – set to last until mid-2016 – ahead of time.

“If we maintain and finalise the improvements achieved through the consolidation of the economy, then long before mid-2016 we will have stood on our own two feet as an economy,” he said.

“In turn, that will create the conditions in international markets leading to the end of our dependence on Troika funding,” he added.

The 2015 budget, Georgiades said, along with the 2015-2017 Medium-term Fiscal Framework, aim at not disrupting the correction already noted in the economy, and he stressed that “the 2015 budget reduces the deficit and adds no new public debt, which records a falling trend.”

“We achieve these goals with no new taxes and no new cuts, but with a moderate increase in public spending, in line with next year’s expected growth,” he said.

The new budget features an increase in public spending of 0.6%.

The projected GDP contraction in 2014 is lower than 3%, compared to 5.4% recorded in 2013 and a 4.2% estimate in the Troika’s fifth progress review of the Cyprus economic programme.
In terms of the public debt, Georgiades affirmed that Eurostat’s GDP revision has helped bring down the debt-to-GDP ratio significantly.

“Under the Finance ministry’s baseline scenario, the public debt is deemed viable and fully manageable,” he said.

“It will follow a declining trend, especially if the (upcoming) bank stress tests reveal recapitalisation needs of less than €1 billion, especially for the Cooperative Central Bank,” he added. “In that case, there will be no increase in public debt and 2015 will see a continuation of the falling trend.”

“And this simply from cutting deficits, the GDP revision and limited bank recapitalisation needs,” he said.

Georgiades said the cost of servicing public debt fell significantly to 2.9% during the third quarter of 2014, while the debt’s duration has been prolonged to 8.7 years, which will save €100m in the 2015 budget.

Unemployment, according to Georgiades is expected to plateau at 14.8% next year.

Remarking on the budgeted revenues, the Finance Minister said they do not include any income from the casino, natural gas and other non-recurring revenues, which will be used as they come to repay public debt.

He exalted the strong performance of sectors like tourism and shipping, as well as the growth in new companies registered.

With regard to the Troika’s demand to reduce the number of civil servants, Georgiades said they will need to be reduced by 4,500 – instead of 5,000 requested by the Troika – by 2016, and this will be achieved through non-replacement of retiring public sector employees.

But Georgiades’ optimism was not shared by the vast majority of parties, with the unsurprising exception of the ruling party.

DISY deputy Prodromos Prodromou said the party welcomes the correction of public finances and the restoration of balance, adding that “from the verge of bankruptcy in 2012, Cyprus has now come far enough to meet the European indices of the Stability Pact.”

DIKO leader Nikolas Papadopoulos said that the party disagrees with the government that the 2015 budget can lead the country out of the programme ahead of schedule. “That is not the picture we are looking at,” he said.

He added that “no country in the world has managed to overcome a recession through austerity policies alone, and Cyprus will not be the exception to the rule.”

He added that it counters growth, as growth-inducing expenditure is non-existent, much in the same vein as last year’s budget. “The basic point that emerges from this budget is that it continues austerity policies in 2015,” he said.

“The Finance minister has attempted to prove the improvable – that austerity can breed growth,” said Evagorou.

EDEK’s Nikos Nikolaides said that major issues facing the economy remain open, and the responsibility of addressing them lies with the government.

“The results of their administration thus far are much poorer than the circumstances called for, and than their own announcements,” he said.

“Both the government’s economic policy and the 2015 budget aim solely to satisfy the Troika-imposed programme obligations,” he added.