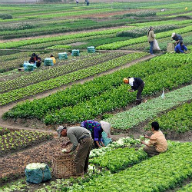 Cyprus recorded a massive improvement in the amount of EU funds absorbed into the island’s Rural Development Project aiming to develop rural areas and production and encourage the creation of more jobs in the farming industry.

According to the island’s Agriculture Minister Nicos Kouyialis, with proper financial management, the absorption of EU funds to Cyprus has increased from 50% to 85% in the period 2007-2013, with more than €282m channelled into the Rural Development Programme 2007–2013 which was completed at the end of 2015.

The Ministry, he said, is proceeding with bold reforms in the agricultural sector, noting that through rational and targeted use of resources included in Programme, the Ministry supports efforts for sustainable development, creating new jobs and strengthening SMEs.

Kouyialis added that a total of €243m will be allocated through the programme, €132.2m of which will come from the European Union.

He added that 600 new jobs will be created, including 350 for young farmers while 170 enterprises and 1,800 farming units will be strengthened financially.