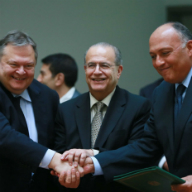 A joint communiqué issued after a meeting in Nicosia between the three countries’ foreign ministers, emphasised their commitment and respect to international law, including the UN Convention of the Law of the Sea, to which all three countries are state-parties.

“Regional security, stability and prosperity for the benefit of the peoples of the region, is better served through the adherence of by all countries concerned to well established principles of international law,” the statement said.

The ministers deplored Turkey’s illegal actions and stressed that they “further undermined the stability and security of the eastern Mediterranean and the Middle East area.”

“They stressed the importance of the respect for the sovereign rights and jurisdiction of the Republic of Cyprus over its EEZ and called on Turkey to cease all seismic surveys underway within the maritime zones of Cyprus and refrain from similar activity in the future.”

Turkey has encroached into Cyprus’ EEZ, dispatching a research vessel to waters south and southwest of the island.

Turkey issued a NAVTEX (Navigational Telex) notifying mariners that three ships would be conducting seismic surveys and designating the sea area reserved until May 13.

The Greek Cypriot side said it will return to the talks when international lawfulness was restored.

Foreign Minister Ioannis Kasoulides stressed that the co-operation between the three countries was not directed against any other country. On the contrary, he said it should attract others wanting to promote stability and peace in the Eastern Mediterranean.

Greek Foreign Minister Evangelos Venizelos said Egypt was the key country in the area due to its size and history.

Cyprus and Greece were EU members located in the area, which created a triangle with added value for the union and euro-Mediterranean cooperation in general.

Echoing his Cypriot counterpart, Venizelos said the trilateral cooperation was not offensive in character.

“On the contrary, we want everyone to be inspired by the same spirit of consensus, cooperation, and respect of international lawfulness,” Venizelos said.

Egyptian Foreign Minister Sameh Shoukry said the cooperation aimed at promoting common values shared by the three countries and their common understanding of stability and peace in the region.

Shoukry said their desire was to further the trilateral cooperation and turn it into a model in the eastern Mediterranean.

The three ministers also discussed the details of a summit between their heads of state that will be held in Cairo on November 8.

Government sources said the meeting was important because it created the prospects of furthering the cooperation between the three countries in several sectors, including security, hydrocarbons, tourism, and others.

Providing Egypt with Cypriot natural gas was also on the table, the source said.

It also emerged that Anastasiades will be visiting Israel in the next few weeks, while Israel’s Foreign Minister Avigdor Lieberman is expected on the island on November 5.