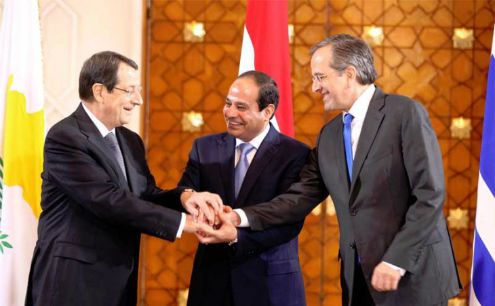 Cyprus, Greece and Egypt all signed the Cairo declaration recently, envisioning the promotion of peace, security and prosperity in the region.

The declaration was hailed as marking the start of a new era of co-operation between the three by Anastasiades, Greek Prime Minister Antonis Samaras and Egyptian president Abdel Fatah al Sisi, who held a tripartite meeting in Cairo on Saturday.

Anastasiades said the declaration is an especially important and inclusive document and that this co-operation does not turn against any country but is based on common values and principles like the application of the international law and on the common goal of promoting peace, security and prosperity.

The meeting also saw the issue of energy on the agenda. “It is our conviction that the discovery of significant hydrocarbon deposits in the Eastern Mediterranean can and must be used as a catalyst and motive for the re-enforcement of regional co-operation instead of causing differences,” he said.

Anastasiades also said the solution of the Cyprus problem will contribute to achieving stability in the region and would serve as a tangible example of solving problems through dialogue and not through military force. He called on Turkey to show the necessary good will and adopt a constructive approach by taking substantial and practical steps toward this direction.

Greece and Cyprus will act as Egypt’s ambassadors in the EU, the president said, and pointed out the need for stability in Egypt, which hasgreat influence in the Arab world and can influence efforts to deal with regional challenges.

“We realised that our views relate in many matters and today we created a very powerful partnership,” Sisi said.

Anastasiades said the declaration is based on four pillars: on political co-operation based on priorities and issues of common interest through common diplomatic actions on a regional and international level; on taking initiatives for the benefit of the peoples of the three countries in the fields of energy, economy, commerce, tourism, culture etc; on the creation of a common front to deal with dangers threatening the Eastern Mediterranean like terrorism, xenophobia and religious segregation; and on becoming a model of a constructive and beneficial co-operation in our troubled common region.

“We stressed the importance to respect Cyprus’ sovereign rights and jurisdiction of its EEZ and called on Turkey to end all of its on-going exploratory activities within Cyprus’ EEZ and avoid similar activities in the future,” the declaration said.

It adds that the discovery of hydrocarbons in the Eastern Mediterranean can be a catalyst for regional cooperation, which will be better served with dedication to the international law.

“In this direction, we place emphasis on the ecumenical character of the UN Convention of the Law of the Sea and we have decided to speed up the negotiations for the delimitation of maritime zones, where this has not been defined yet,” the declaration said.

The three countries called for ajust and lasting settlement of the Cyprus problem that would reunite the island according to international laws, including the United Nations’ Security Council votes.

The declaration also stressed the determination to continue the struggle of the Egyptian people for democracy and prosperity through the implementation of a road map, including parliamentary elections, which will mark the culmination of the democratic procedure, which is already demonstrated in the adoption of a new constitution and the presidential elections.

Cyprus, Greece and Egypt had agreed on guidelines to continue and improve cooperation between them during a New York meeting between the three countries’ foreign ministers in September.