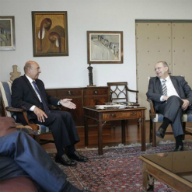 Cyprus, Greece and Jordan recently held their first trilateral meeting at the level of permanent secretaries of foreign ministries in Nicosia.

Speaking afterwards Zenon said: “As with the other tripartite cooperation with Egypt and Israel, our ultimate goal, our strategic objective is the promotion and the promotion of stability, peace and prosperity in the Eastern Mediterranean region and the broader Middle East”. Zenon said there would likely be a meeting of the three foreign ministers before the summer, during which they would prepare for a summit of the three leaders.

A joint declaration was adopted at the end of the meeting. It said the three officials had discussed ways of trilateral cooperation in multilateral fora and exchanged views on regional and international issues, especially on developments in the Eastern Mediterranean, the Middle East and the wider region.

“The discussions reflected the common will of the three countries to establish solid and continuous coordination and cooperation in all fields,” it said.

The parties agreed to expand their dialogue at all levels with the aim of promoting common interests and contributing to regional peace, stability, security and prosperity, it added.

Asked if there were any indications of future cooperation in the energy sector, Zenon said that there was already a bilateral dialogue with Jordan on energy and there was some interest from Jordanian side.